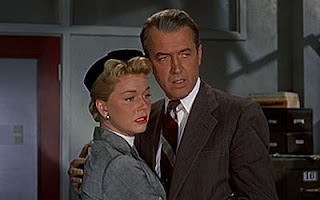 Typical but entertaining Alfred Hitchcock thriller about a doctor (Jimmy Stewart) and his ex-perfomer wife (Doris Day) whose son is kidnapped while they are on vacation in Marakesh. They embark on an odyssey that sends them across continents, up a few blind alleys and finally to the Royal Albert Hall in London.

One of my favorite scenes is where Stewart goes to meet Ambrose Hall to get information about his boy, only to find out the Ambrose Hall he goes to is the wrong one! Just one of Hitchcock's misdirections, but a interesting bit of comic relief at a tense time in the movie.

Posted by 1001: A Film Odyssey is produced, directed and written by Chris, a librarian. at 7:40 PM