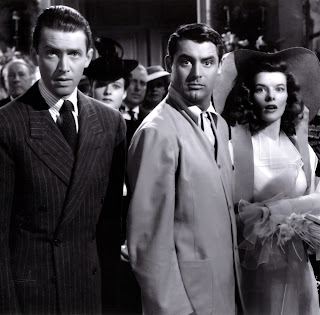 The 1001 Movies You Must See Before You Die book has an index of all of the directors of all of the films listed within its covers. It’s easy to determine that Alfred Hitchcock (with 18 movies listed) is easily the king of the directors. This made me curious which actor had the most listings. Since there is no similar index for thespians, that proved to be a little more difficult to determine. I figured it had to be an American actor, since there are more American movies listed in "the book" than anything else. Humphrey Bogart? John Wayne? Jack Nicholson? Meryl Streep? Bette Davis?

I then counted up the listings under the man that critic David Thomson called, “the best and most important actor in the history of cinema.” Well, with 10 listings in the book, Cary Grant certainly made quite an impact anyway.

One reason for Grant's many listings is his ability to perform in different genres. They include:

A flair for the comedic: The Philadelphia Story, Bringing Up Baby, The Awful Truth, She Done Him Wrong, His Girl Friday

It helps to be in a few Hitchcock classics: Notorious, North By Northwest

An occasional outing as an action star: Gunga Din, Only Angels Have Wings

And we can even throw in a romance for good measure: An Affair to Remember

And there are some pretty good Grant films that didn’t make the 1001 list: To Catch a Thief, Talk of the Town, Charade, Arsenic and Old Lace, Topper.


So ten listings for Cary Grant. That’s got to be the most, right? Well, I was going to finish all the Grant movies this month, but then I realized I hadn’t counted the movies of everyone’s favorite everyman, Jimmy Stewart.

Stewart also appeared in a lot of notable films in different genres which include:

A flair for the comedic: The Philadelphia Story, It’s a Wonderful Life, Harvey

It helps to be in a few Hitchcock classics: Rope, Rear Window, Vertigo, The Man Who Knew Too Much

Some memorable outings in drama: Mr. Smith Goes to Washington, Anatomy of a Murder, The Mortal Storm

15 listings! I think we have a winner. The 1001 book’s proclivity for listing a lot of old Westerns really helped with Jimmy Stewart’s total.

And there are also some pretty good Stewart films that didn’t make the 1001 list: Spirit of St. Louis, You Can’t Take it With You,How the West Was Won, Call Northside 777

Plot summary: Tracy Lord is engaged to George. Her ex-husband C. K. Dexter Haven shows back up for the wedding. Macauly Conner, the reporter covering the story, falls for Tracy, much to the chagrin of Elizabeth Imbrie, also working on the story. Of course, Tracy is probably still in love with with C. K. Dexter Haven. Farce ensues. (Anyone doing a Cary Grant impersonation should do it saying “My name is C. K. Dexter Haven!” slowly emphasizing each syllable)

The Philadelphia Story is an enjoyable enough farce, but for me it not as much fun as some other of the great screwball comedies (My Man Godfrey comes to mind).

There are some memorable moments, I loved Jimmy Stewart’s drunk scene, for example. And the star power of the three leads of Katherine Hepburn, Grant and Stewart is a force. What’s the modern day equivalent? Julia Roberts…George Clooney…Brad Pitt maybe…Oh, no! That’s Ocean’s Eleven!”

Danny Peary’s book Alternate Oscars takes away Stewart’s Oscar for this film and gives it to Henry Fonda in The Grapes of Wrath. He gives Stewart the prize for It’s a Wonderful Life. If only life worked like this! As long as we're doing Oscar do-overs, let's give Jimmy one for Harvey too.
Posted by 1001: A Film Odyssey is produced, directed and written by Chris, a librarian. at 11:56 AM