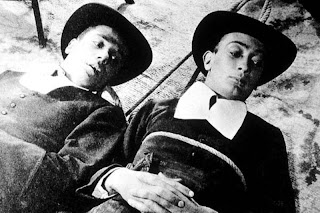 There are several experimental or avant garde films on the 1001 movie list. In trying to figure out how to deal with them, I decided that the best way for me to handle these often tough nuts to crack is just watch them and try to answer ten basic questions about them on my personally devised standardized test. So let us now begin with...

1. What happens?
This guy sharpens a straight razor and slices into the eyeball of this woman. Then we see another guy in female attire riding a bicycle who falls down on a curb. Then we see yet another guy with ants crawling on his hand. And this other guy (or is it a different guy?) gropes a woman's breast and buttocks. Then he begins pulling a piano with a deer and a couple of clerics on it. A lady gets run over by a car. And then we see the two main characters buried in the sand. I may have missed a few details here and there.

2. Was it heavy? Did it achieve total heaviosity?
Yes, it was very heavy and coming to a Film Studies 101 class near you.

3. What was your favorite part?
I suppose the dragging the piano weighed down by clerics scene if I had to choose one.

4. What was your least favorite part?
I suppose the dragging the piano weighed down by a dead deer scene if I had to choose one.

6. Might the viewing experience have been enhanced from either prescription or non-prescription medication of some kind?
Absolutely

7. What about the sex?
I repeat there was a scene where we see excessive groping of breasts and buttocks.

8. What about the violence?
Eyeball slicing. Hit by car. Oh, and I forgot to mention a guy gets shot dozens of times. I'm not sure if he dies or not or just turns into a deer weighing down a piano that someone is trying to drag.

9. Describe this film in one sentence starting with "This is the film..."
"This is the film where they slice the eyeball and then the director successfully makes a film that intentionally makes no sense at all."

10. Would you watch it again?
I'm sure I will if I ever decide to take another Film Studies class. 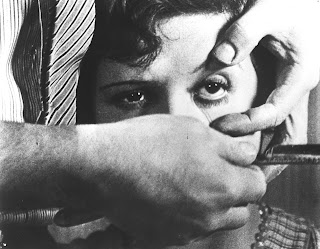 Posted by 1001: A Film Odyssey is produced, directed and written by Chris, a librarian. at 7:53 AM