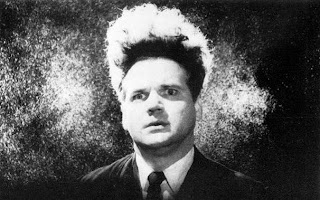 
It would appear that I've just about exhausted the Horror film index of the 1001 Movies You Must See Before You Die. But here are a couple of 1001 films technically listed as horror that I haven't done a blog on before.

One night during the 80's, I suggested to a couple of buddies we get a couple of "trippy" movies. One was Cocaine Fiends, a Reefer Madnesslike 30's propoganda film where the heroine is given "headache powder," that she becomes addicted to and then the revelation of the film comes in the line "You dumb, broad. That's not headache powder! That's COCAINE."

Cocaine Fiends was good for some campy laughs, but then we watched in Eraserhead. This put a damper on our jovial mood. What the hell was this about? I was given several looks of confusion from my friends during our viewing, as I was the one who chose this oddity afterall. But we watched it to completion.

Trying to read the plot straight: A young man named Henry Spencer appears to be hatched from outer space and sent to earth by a creator figure. He wears a suit, has a "tall" hair style and lives modestly within an industrial complex. His profession is as a printer in a factory. He briefly meets the sexy neighbor who lives across the hall.

He meets up with his girlfriend, Mary and they have dinner with her parents. The girlfriend's mom serves them a type of chicken dish that bleeds and moves. We find out that the girlfriend is pregnant and the scene ends.

We are now in Henry and Mary's apartment and they have since gotten married and have a loud baby that resembles an alien. Mary can't stand the sounds that the alien baby makes and moves out.

The baby gets sick and Henry tries to take care of it.

We then cut to a new character, a blonde with puffy cheeks, who performs a song about heaven on a stage.

The attractive neighbor comes over and sleeps with Henry.

Henry then appears on the stage with the blonde before his head pops off and shows that he is also an alien!

A kid takes Henry's head to a factory where they make erasers out of it.

But apparently it is all a dream, as Henry is back in his original form and we see Henry cut open the bandages that surround his baby and the insides of the baby spill out in a white foam!

Erasehead ends with a shot of the creator figure before the blonde with the puffy cheeks and Henry embrace.&nbsp

I may have the order of a couple of scenes off, though recounting the plot of Eraserhead is pretty pointless. Director David Lynch has said that no interpretation he has ever heard of this film has matched his.

Anyway, after me and my friends finished the film, they asked me what the hell that was all about. I said I didn't know and that was the end of it.

Häxan: Witchcraft Through the Ages

Truly a hard film to put a label on. This Danish silent gives a narrated trip on witchcraft through the middle ages. But don't worry, Satan fans. There's plenty of him there too!

You can experience this either through subtitles or through the narrative talents of Naked Lunch author William S. Burroughs if you watch the updated version from the 60's.

Some of the artwork they show depicting Satan and his minions is admittedly stunning while Burrough's gives us a brief history lesson of withcraft, sorcery and demons in Europe's middle ages.

But that's just the first part!

Then we have a series of dramatic scenes featuring Satan, worshippers of Satan and those being preyed upon by Satan.

And if that weren't enough, we come to another series of scenes depicting those accussed of withcraft (featuring a 78-year-old flower seller named Marda Pederson) and her single minded accusers.

Finally, we come to the modern part of the film (Modern being 1920) where the church has now been replaced by psychiatry and demonic possession is replaced by neuroses of various kinds.

Häxan probably seemed so groundbreaking and ahead of its time (it has a rich history of being banned) but at the same time it seems like a bit of an enigma. How do you categorize it? What is the point here? And why did I watch this right after Eraserhead? 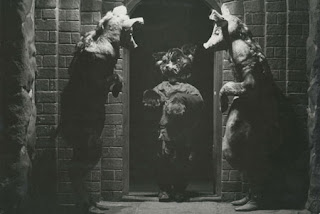 Posted by 1001: A Film Odyssey is produced, directed and written by Chris, a librarian. at 8:44 PM