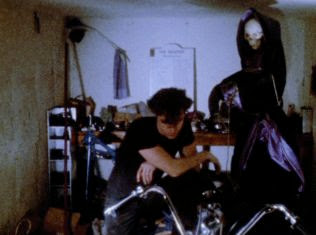 
Scorpio Rising
1. What happens?
Well, there's this guy working on his motorbike. He seems to like James Dean, Marlon Bradon, skulls, tatoos, cigarettes and...leather...and chains. We see his friends, who also like leather quite a bit... Well, that was an interesting shot they just showed! Then the friends take the motorbikes to a party. Doesn't seem to be many women at the party, but all appear to be having a good time!... Oh, dear...why did they do that? And we see a motorcycle race, interspresed with a film about, uh...Jesus. I mean that literally. Interspersed with a film about Jesus!

Oh, my. Then there's a Nazi chess board..and uh, did I mention that there were 50's and 60's tunes like "Devil in Disguise," "My Boyfriend's Back," "Heatwave," and "Wipeout," playing throughout?

3. What was your favorite part?
As I mentioned, the musical choices were very good.

4. What was your least favorite part?
I guess I would say all the shirtless leather boys, but I'm just so damn open minded I only had to use the skip ahead on this video three times!

5. Did you get it?
I think so. Wait, I'm not supposed to get it. I'm changing my response to no. Final answer.

6. Might the viewing experience have been enhanced from either prescription or non-prescription medication of some kind?
No, not this time.

7. What about the sex?
There was plenty of underlying sex here. It's just not sex for my team. But you know, everything can't be Ilsa: She Wolf of the SS!

8. What about the violence?
There are a few things happening which you might want to label as violence, but the victims don't seem to be very unhappy about it.

10. Would you watch it again?
Probably not. But it did make we want to listen to some more Fifties and Sixties tunes!
Posted by 1001: A Film Odyssey is produced, directed and written by Chris, a librarian. at 8:12 AM