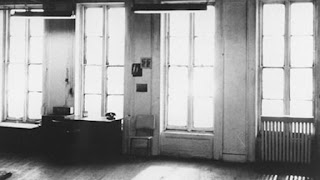 1. What happens?
We see a room. It appears to be a business of some kind which overlooks a fairly busy city street. There is a chair, a desk, a phone and a few pictures in the room. A couple of girls wander in and listen to "Strawberry Fields Forever." The room changes intermittently between light and shadow, between silence and a loud buzzing. There appears to be a man die at some point and a woman comes in a few minutes later and calls the authorities. We conclude by coming to a close-up picture of the ocean which the viewer appears to be taken into it.

2. Was it heavy? Did it achieve total heaviosity?
Few are heavier.

3. What was your favorite part?
The woman that called the police did break up the monotony of staring at the wall for the last ten minutes, though I also liked the "Strawberry Fields Forever" interlude.

4. What was your least favorite part?
I could only take so much of that buzzing sound.

5. Did you get it?
Sometimes yes, sometimes not so much.

6. Might the viewing experience have been enhanced from either prescription or non-prescription medication of some kind?
Without question

7. What about the sex?
The woman that called the police, I imagine being sexy in a goth kind of way. Didn't really get a good look at her though.

8. What about the violence?
A guy appears to be killed. How and why is up to your imagination. I admit I kind of like that.

9. Describe this film in one sentence starting with "This is the film..."
This is the film where nothing much happens for long periods of time, though if you were to argue that by nothing happening, many things happen really are happening, I would't try to argue with you.

10. Would you watch it again?
I might. Maybe after a fast so my head will be clear of my preconceived bourgeois ideas of what a proper narrative should be.
Posted by 1001: A Film Odyssey is produced, directed and written by Chris, a librarian. at 8:06 AM