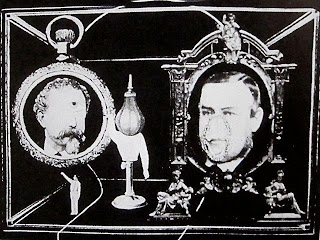 1. What happens?
A series of cut-out animation images come and go throughout the length of the film. Some of the images seem related. Some seem arbitrary.

2. Was it heavy? Did it achieve total heaviosity?
I will yield the answer to this to question number 6.

3. What was your favorite part?
I thought the cut-out animation presented during the beginning was a clever way to open a film.

4. What was your least favorite part?
When I realized that the cut-animation that opened the film was actually going to go on for the entire film.

5. Did you get it?
Once again, I will yield to question number 6.

6. Might the viewing experience have been enhanced from either prescription or non-prescription medication of some kind?
Let me put it this way. During my 66 minute viewing, I was often bored or distracted. However, with the right type of medicinal enhancement, this film might look like freakin' Citizen Kane to me! Oh, Heaven and Earth Magic! Why couldn't I have seen you in 1988?

7. What about the sex?
Not much definable in the way of sex.

8. What about the violence?
Not much definable in the way of violence.
No sex? No violence? Why, it's an avant-garde film for the entire family!

10. Would you watch it again?
As soon as they perfect a Wayback Machine and I can get back to 1988.
Posted by 1001: A Film Odyssey is produced, directed and written by Chris, a librarian. at 8:09 AM