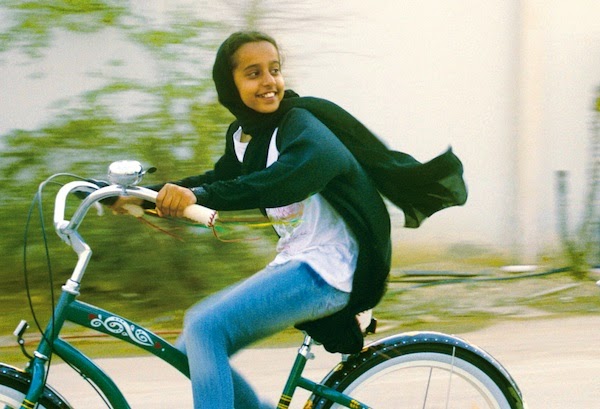 Some preliminary reports for the listing of new films for the 2014 edition of the 1001 Movies You Must See Before You Die include the Saudia Arabian film Wadjda. We showed this film for our foreign film series at the library last week and though we didn't get a big turnout, the film was well received and I was quite taken with it.

It's a small scale film that draws obvious comparisons with the neo-realistic classic, The Bicycle Thief. However, the stakes are different here. Wadjda's bicycle isn't an economic necessity like in The Bicycle Thief, but a dream of something she desires while the society she lives in frowns upon her having it.

I would be predisposed to rooting for this movie after reading about the difficult odyssey of female Saudi filmmaker Haifaa al-Mansour in getting this movie made. Financing it was difficult in that Saudi Arabia has no film industry to speak of and the fact that she was a female director didn't exactly open doors.

Luckily, the finished product is a most interesting character and societal study, and al-Mansour's difficult decision to shoot it in Saudi Arabia pays off. I feel I'm inside a society I've never seen before and really get to know the struggles of Wadjda, her family, her friends, her schoolmates and teachers.