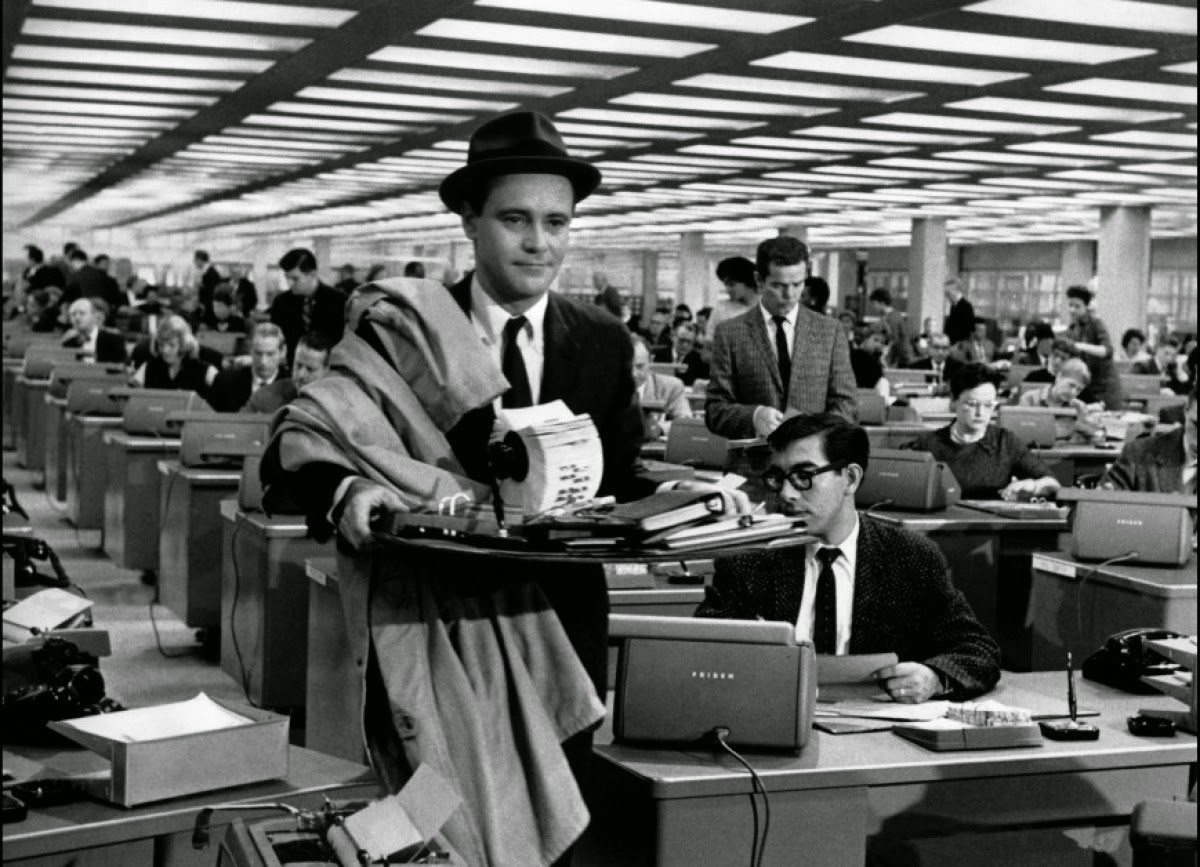 After all these years and several viewings, The Apartment remains one of my favorite films. C. C. Baxter (Jack Lemmon) works in a giant New York office where he sits at one of the endless rows of desk which would seem to be a good recipe for making any worker an anonymous drone. The only way to move up for C. C. is to lend out his apartment for the lecherous executives to have a place to take their girlfriends to. Women are pretty much playthings to these guys. The one guy who seems to really respect women and falls for the elevator operator played by Shirley MacLaine is C. C. himself. But C. C. does get a promotion, when he loans out his apartment to the big boss played by Fred MacMurray. But this ends up causing more problems than solving them.

I'm a big Billy Wilder fan and The Apartment has the winning dialogue I associate with his movies. Lemmon is also a very good everyman and I love when he tells a floozy that he is single and she says it must be sad to go home to an empty apartment every night. He wryly responds that he may be single, but that doesn't mean he has an empty apartment.


And the Elisha Cook Jr. supporting player award goes to..Ray Walston. I could give this to Fred MacMurray as Lemmon's unsympathetic boss, but I'm going with Walston who plays one of the execs who borrows C.C.'s apartment.Walston is brash and he and the other execs schedule their rendezvous at the apartment like they are scheduling business meetings.

It's certainly not the most memorable role in the film, but Walston is so unflappable in his arrogance, that he comes across as funny and likable despite himself. I grew up watching Walston in the 60's as Uncle Martin in the more that likely dated show My Favorite Martian. But I certainly loved the show when I was four! I was surprised to see that Walston was never nominated for an Academy Award. I would think that his movie stealing 1958 roles in Damn Yankees! and South Pacific would have been good for at least one nod! Walston's later roles included Mr. Hand in Fast Times at Ridgemont High, Mr. Boothy the caretaker in Star Trek: The Next Generation, Picket Fences and some pretty funny AT & T commercials.

Posted by 1001: A Film Odyssey is produced, directed and written by Chris, a librarian. at 8:21 PM