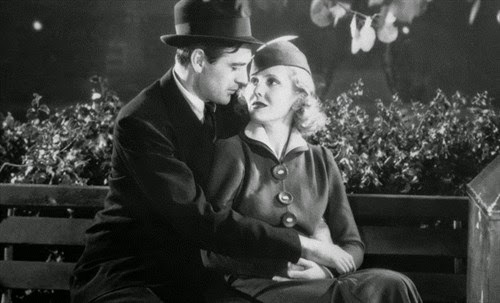 It was kind of funny seeing Mr. Deeds Goes to Town after so many years. The plot of a local yokel being taken advantage of by big wigs that end up underestimating him and having the local yokel getting Jean Arthur to fall in love with him could also describe Frank Capra's follow up film Mr. Smith Goes to Washington. But both movies are fun to watch with lots of laughs, snappy dialogue, the lovely Ms. Arthur, lots of inspirational scenes and certainly both have their share of "Caprcorn." But I'm not complaining. I like Gary Cooper as the everyman Deeds, but I'm glad Capra had to "settle" for Jimmy Stewart in Mr. Smith. I could picture Stewart doing Mr. Deeds, but can't picture Cooper as Mr. Smith.

And the Elisha Cook Jr. supporting player award goes to..Lionel Stander is probably best remembered by some as Max on the show Hart to Hart. But the gravelly-voiced character actor had a career that began in the early 30's and continued through the early 90's, shortly before his death. Some of the movie roles I remember his in include Cul-de-Sac and Once Upon a Time in the West. He is a standout in this early role of Cornelius Cobb in Mr. Deeds. Cobb plays a guy who is trying to help use Deeds at first, but quickly becomes a friend and supporter. I thought almost every line Stander said in this movie was funny. It's also interesting to see him so young, but his comic timing was clearly already solid.

Posted by 1001: A Film Odyssey is produced, directed and written by Chris, a librarian. at 1:38 PM