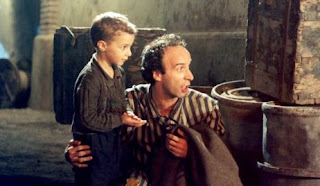 When you look at the plot of  Life is Beautiful, it seems like it could have been a disaster along the lines of Jerry Lewis's infamous The Day the Clown Cried. Robert Benigni plays a Jew living in Germany with his family shortly after the Nazis take power. He goes through a lot of escapades, romance and Buster Keatonesque shtick in the first half of the movie. Then Benigni and his son are taken away to a concentration camp where he spends most of the time trying to convince his son it's all a game. The mixing of the the slapstick and tragedy (Frankly, more successful than the mixing of unrelated themes in All This and World War II) actually works. It's sad, tragic, but inspirational at the same time. And Benigni ended up as one of the few acting Oscar winners ever to win that honor in a non-English language movie.


I guess it's okay to call Henry Gross a one-hit wonder since he proudly alludes to that title in the picture below. That hit of course was Shannon from 1976. That song is memorable partly for Henry's falsetto, which he also uses in the soundtrack's version of Help! 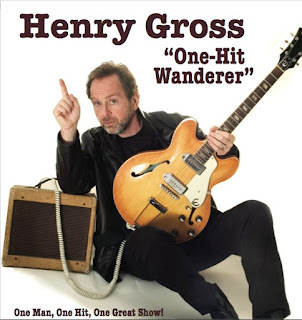 Legendary musician Peter Gabriel, with Genesis and with those crazy 80's videos, lends a distinctive version of Strawberry Fields Forever to the soundtrack. Now if you'll excuse me, I think I'll go listen to Shock the Monkey or watch the Sledgehammer video for old times sake. 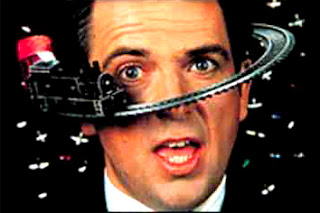 Strawberry Fields Forever
https://www.youtube.com/watch?v=KBXXqpOq9po
Posted by 1001: A Film Odyssey is produced, directed and written by Chris, a librarian. at 12:19 PM