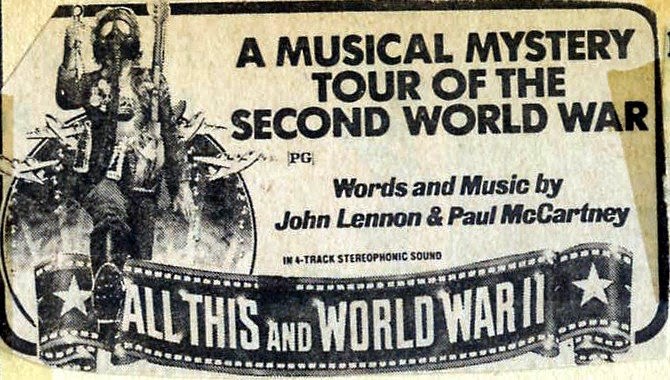 In 1976, a documentary about World War II came out that was accompanied by the music of the Beatles performed by artists other than the Beatles. If you aren't familiar with it, I assure you that I'm not kidding. Of course the Beatles era was the 60's and World War II ended in 1945. So the combination is more than a little odd. But the clips of the second World War (both actual footage and scenes from movies) do at times mesh with the narrative. Fool on the Hill is played as we see scenes from Hitler. Sun King is played as we see the coming of Japanese into the war. She's Leaving Home is played as we see women going off to work to support the war effort. And if the opening song sees the big war as a Magical Mystery Tour, I suppose I'll give them the benefit of the doubt on that one. Of course, I'm not sure where I Am the Walrus or She Came in Through the Bathroom Window quite fit into this narrative, but there you have it.

But I think this film is less about the 40's or 60's than the 70's. That is through the musical choices of who is to sing which classic Beatles song over footage from the Battle of Guadalcanal or the Yalta Conference. So this month, I'm going to look at some World War II films and also look at the songs and artists from All This and World War II.

Ambrosia was a Southern California band that had a couple of top ten hits I recall from the late 70's. How Much I Feel, Biggest Part of Me and You're the Only Woman were their biggest hits. Their version of Magical Mystery Tour begins All This and World War II and is a pretty nice cover. The group tours today and still perform Magical Mystery Tour during their shows.

Here is a link to their version of Magical Mystery Tour
https://www.youtube.com/watch?v=VKQn-f6Q9hY

Posted by 1001: A Film Odyssey is produced, directed and written by Chris, a librarian. at 1:25 PM