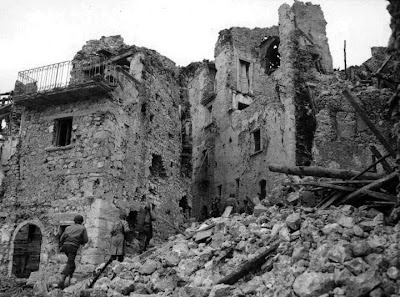 John Huston's documentary about the bloody American campaign in Italy was presumably filmed by Huston and his crew alongside of the troops during the battle. However, despite the effectiveness of the many battle scenes, much of it has been exposed as being largely filmed as recreations of the events shortly after the occurrence of the battle. Details of the filming of The Battle of San Pietro is written about in the excellent book Five Came Back: A Story of Hollywood and the Second World War. Does knowing this fact detract from the films effectiveness? Maybe a little. But it sure seems like you are there and I like Huston enough to cut him a little slack here. Huston's other controversial (In that it was banned for thirty years!)  post-World War II documentary, Let There Be Light, about postwar soldiers trying to recover from the horrors of war at a mental hospital is also worth seeing.


From the Soundtrack of All This and World War II

Who drummer Keith Moon was certainly one helluva percussionist. What he wasn't, was one hell of a singer. His performance of When I'm Sixty-Four unfortunately reminds me of his less than impressive solo album, Two Sides of the Moon.

There seems to be a rumor based on an off-handed comment 70's Scottish rock legend Rod Stewart made that he is (gasp!) not much of a Beatles fan. But what about this happy picture below with Paul and Linda? And why did Rod record Get Back and In My Life if he's no Beatles fan? I'm not sure about any of that, but I do think Rod's version of Get Back is one of the best covers on The All This and World War II soundtrack.

English musician David Essex is one of those acts that had a lot of success over the years on the UK record charts, but had limited success in the United States. The exception is David's Rock On, which was not only a top 10 hit in the states, but is still playing in the background of an Applebee's near you. David also had success as an actor including the film That'll Be the Day, which featured a critically acclaimed supporting performance by Ringo Starr.

Essex recorded a version of Yesterday for the All This and World War II soundtrack, which makes his version one of about 1,600 different Yesterday recordings according to the Guinness Book of World Records.

Posted by 1001: A Film Odyssey is produced, directed and written by Chris, a librarian. at 6:24 PM