Mikhail Kalatozov's The Cranes are Flying in some ways is a pretty simple story about the separation of lovers and family during war. But it's the way the film is told that makes it so memorable. Much of the editing, skillful camerawork and quality of the filmmaking give this film a most poetic quality and is a movie I hope to revisit soon.

When I think of long time pop crooner Bryan Ferry, I usually think of two things. The first is the song More Than This with his group Roxy Music, which was one of the most highly rotated songs and videos from the early days of MTV. I always thought the video, which featured Ferry staring at a movie screen of Roxy Music performing the same song he had just been singing was interesting, if a little odd. 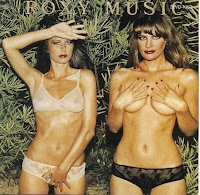 The other thing I think of when I think of Ferry is the album cover to Roxy Music's 1974 album Country Life (pictured above). I can't imagine why.

Prolific musician Roy Wood was a founding member of the 60's band The Move and the 70's supergroup ELO. He has had a very prolific and influential music career throughout the last fifty years! His versions of Lovely Rita and Polythene Pam are okay, but suffer from an overly flowery arrangement.

Oh, George Martin, where art thou!