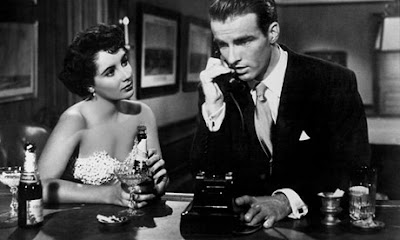 You have to give Shelley Winters some credit. She came up as a sexy leading lady in the late 40's, but her movie star looks seemed to fade awfully fast and she fell into obscurity and was never cast after that...Only that wasn't what happened at all! Shelly transitioned into one of the most prolific character actresses in movies for the the next thirty or so years, winning supporting actress Academy Awards for The Diary of Anne Frank in 1959 and A Patch of Blue in 1965. She was also nominated as Best Actress for A Place in the Sun, but I think her part would have been more appropriate in the supporting category.

Some of her subsequent supporting roles include: Lolita's ill-fated mother in Lolita, another mother role in the 60's cult film, Wild in the Streets, another ill-fated romantic lead in Night of the Hunter, the lead gangster in Bloody Mama and of course, her turn in the 70's disaster film The Poseidon Adventure. She also was the a frequent talk show guest over the years, where her persona as a rather abrasive, middle-aged, heavy-set woman was instilled in many of us.