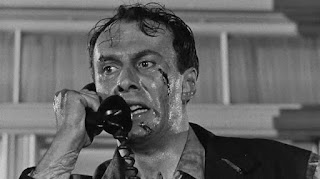 The Phenix City Story is a most interesting motion picture. The first part of the movie has interviewer Clete Roberts interviewing members of the town of Phenix City, Alabama about episodes of corruption in their community and how their town has been run under the thumb of crime boss Rhett Tanner.

We then start the actual movie which dramatizes the events of these occurrences featuring the crime syndicate and the few brave souls (including Richard Kiley above) who bravely stand up to them. The movie overall is a blend of Film Noir, Southern Gothic and documentary, making The Phoenix City Story a combination of styles that I've never seen lumped together quite like this before. We see some horrific images in this movie, the most famous of which might be the murder of a young black girl. The uniqueness of the project alone puts this in my 1001 book.

But first, there are several other interesting supporting players in The Phenix City Story.


John McIntyre-plays the reluctant, but good old politician here. McIntyre's career was made up chiefly of Westerns, I know him from best as the sheriff in Psycho.

Kathryn Grant-The leading lady of this movie is best known for later marrying Bing Crosby and being a fixture on The Crosby family holiday specials that ran until Bing's death in 1977.

John Larch-Character actor Larch just has one of those faces you've probably scene in countless movies (including Written on the Wind) and TV shows. He plays a particular nasty thug in Phenix City. I remember him best from The Twilight Zone Episode "It's a Good Life." To his demonic son in that episode: "But it's good that you're making it snow, Anthony, - it's real good. And tomorrow - tomorrow's going to be a real good day!"

James Edwards-I was trying to remember where I saw James Edwards before and realized that it was in the parking lot scene with Timothy Carey in Kubrick's The Killing. He also had a role in as one of the platoons members in  The Manchurian Candidate.

Clete Roberts-Real life reporter Roberts is the featured interviewer in the narrative section of Phenix City. I realized where I had seen him before (again as the interviewer) was in a memorable episode of MASH.

Edward Andrews-But my official award goes to Edward Andrews who almost always seemed to play a smug, unlikable businessman or in this case a politician. He's particularly nasty in Phenix City and plays a corrupt character that's easy to hate. Andrews appeared in more TV shows over the years than movies, including the part of someone terrorized by an automobile in another Twilight Zone episode called You Drive.

But what I remember him best for is a 1975 Die Hard battery commercial that played for years. In that commercial, Andrews and his wife are going to a formal function of some kind and can't start his car. He goes back in his house and sheepishly asks his son if he may borrow his car. The son throws him his keys and reminds Andrews to not forget to put some gas in it. Andrews indignant look at this statement is the highlight of the commercial. The couple go to their function in their son's hippie wheels as the announcer reminds us to use all to use a Die Hard battery next time. One of the best commercials of the 70's.

Posted by 1001: A Film Odyssey is produced, directed and written by Chris, a librarian. at 9:29 AM