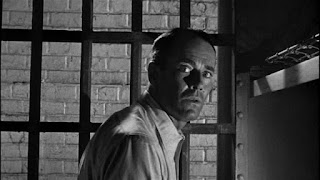 A man being accused of a crime that he didn't commit isn't anything new to fans of Alfred Hitchcock, but this is such a stark, serious black and white film that Hitchcock gets his famous cameo out of the way immediately in the prologue! Henry Fonda is good as usual in the part of a humble musician who makes the mistake of resembling someone who has committed a string of robberies. The big question the drama presents is how is our protagonist going to get out of this mess? And that question alone is enough to sustain enough suspense to carry it through to the end. I also like the domestic scenes with Fonda and Vera Miles and their two children. I wouldn't put The Wrong Man in my all-time favorite Hitchcock movies list, but it is a welcome addition to the 1001 list and it was good to see one of his films that I've never seen before.


British actor Anthony Quayle (not to be confused with Anthony Quinn, like I  did when I was a kid) plays the lawyer trying to get the innocent Fonda sprung from the joint in The Wrong Man. Quayle is best known for playing supporting roles in epics like Lawrence of Arabia, The Fall of the Roman Empire, The Guns of Navarone and countless BBC productions. He also later played The King in Woody Allen's Everything You Ever Wanted To Know About Sex * But Were Afraid To Ask. But what I remember him best for is as host of the paranormal anthology series, The Evil Touch (Even though the run lasted only for 26 episodes). Quayle would come out before the cameras (kind of like Alfred Hitchcock in his own show come to think of it) before each show in a shroud of mist looking distinguished with his goatee and deep voice and then would proceed to describe the episode for that week (which seemed to usually star Vic Morrow or Harry Guardino). He wouldn't return until the end of the show to menacingly remind us that there is a touch of evil....in all of us.