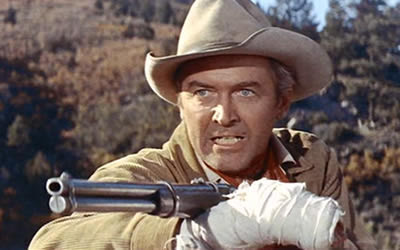 I admit that I've enjoyed going through the Anthony Mann Westerns on the 1001 list, mostly because I've never seen any of them before I started doing this blog. In The Man From Laramie, Will Lockhart (James Stewart) is the guy from out of town who just wants to collect some supplies....but you know he's going to get mixed up with the locals and have problems that are going to force him to stay. There is naturally a local gal who may spark enough interest for Lockhart to want to stay. There is also a blood feud between a powerful family and almost everyone who isn't them which propels most of the film's drama. Also, look for a couple of plot twists that you may not be see coming.

And the Elisha Cook Jr. supporting player award goes to (TIE)..Aline McMahon and Wallace Ford. The Man From Laramie has several previous Elisha Cook award winners: Jack Elam, Arthur Kennedy and Donald Crisp. I'd like to give the award to two performers that I know mostly from only one other film. Aline McMahon's career lasted from the 30's until the 70's. But honestly, the only thing other than this film that I've seen her in is Gold Diggers of 1933, my favorite of the Busby Berkley musicals. In Gold Diggers, she plays Trixie, the wisecracking showgirl who ends up with Guy Kibbee. She has some of the best lines in that movie. In Laramie, she has aged into the matronly but tough ranch owner who ends up (presumably happily ever after) with Donald Crisp at the end.

I have seen Wallace Ford in a few things other than as Jimmy Stewart's grizzled partner in The Man From Laramie. He appeared in Hitchcock films (Shadow of a Doubt, Spellbound), was the cabdriver in Harvey and one of his last roles was as Aunt Bea's suitor in an episode of The Andy Griffith Show. But his signature role has to be as the clown in the movie Freaks, where he shares the screen, with Johnny Eck, the Caterpillar man, the bearded lady and Harry Earles the midget. And who could forget his scene with Schlitzie the Pinhead! "Hey Schlitzie, that's a real pretty hat!"
Posted by 1001: A Film Odyssey is produced, directed and written by Chris, a librarian. at 10:04 AM