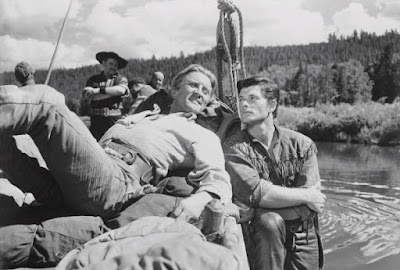 The Big Sky is a pretty good Howard Hawks film about a group of fur traders (featuring Kirk Douglas as a scalawag, roustabout, tag along to the group) attempting to deal with Indians and other ruthless business competitors. It's a nice adventure scene with some beautiful black and white photography, though I'm not sure I would have included this one on the list. One question I have is why is this film so hard to find? I had to get an old VHS copy from inter library-loan because it wasn't available (that I could see) on DVD or Blu-Ray or on any online service that I had access to. Just wondering.

And the Elisha Cook Jr. supporting player award goes to..Arthur Hunnicutt
Arthur Hunnicutt had one that special something that a lot of character actors of the Hollywood Golden Age with long careers seemed to have going for them: Look like a old man even when you're fairly young. It's odd that the grizzled old trapper/narrator from The Big Sky was only in his early 40's when this movie was made. This persona served Hunnicutt well as he played it in many Westerns beginning in the 40's and going through the 60's. The part I will always best remember Hunnicutt is as a recently deceased hunter who goes to tries to find his way to heaven with his trusty hound dog in an episode from The Twilight Zone. which features one of my all-time favorite lines, "A man, well, he'll walk right into hell with both eyes open. But even the Devil can't fool a dog!" The funny thing is, before I looked it up, I remembered Hunnicutt as saying this line, which is incorrect. He has it said to him. Damn.

Additional note: It's interesting sometimes to look up who the particular reviewers were that chose certain movies for the 1001 book. This one was chosen by Edward Buscombe, a critic who has written articles about genre in films and books on Western films. Clearly he is partial to add films from his favorite genre! He also contributed the blurbs for the 1001 book on Stagecoach and The Searchers, which are certainly no-brainers for inclusion...but clearly went outside the box in the addition of The Big Sky. If I were adding another Kirk Douglas Western, I would have put in Lonely Are the Brave...But that’s me. I do like that the list doesn't always stick to just the obvious choices all the time.
Posted by 1001: A Film Odyssey is produced, directed and written by Chris, a librarian. at 9:51 AM