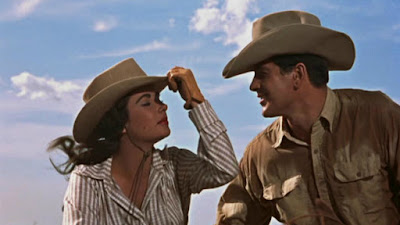 I've always thought this was to the 50's  what Gone With the Wind was to the 30's. A truly epic American tale of Texas, oil, ranchers and featuring the star trio of Elizabeth Taylor (Leslie Benedict), Rock Hudson (Bick Benedict) and James Dean (Jett Rink). My favorite part of the film (I'm sure this is covered in Edna Ferber's book as well) is the evolution of rich cattle rancher Bick Benedict from clearly being a racist at the beginning of the film to becoming by the film's final scene a staunch defender of his Mexican grandchild...I can hear The Yellow Rose of Texas playing in the background now.

In Giant, Chill plays Uncle Bawley, the sort of patriarch of the Benedict family, who seems to spend a lot of time keeping the others out of trouble. He does have one of the best lines in the movie, observing the newfound wealth of Jett Rink, "Bick, you should have shot that fella a long time ago. Now he's too rich to kill."

The long career of Chill Wills as a supporting actor was usually in supporting roles in Westerns, often with his friend John Wayne. He received an Academy Award nomination for his supporting role in The Alamo. The first movies I remember him from were his voice-overs in The Francis the Talking Mule movie series, the forerunner of Mr. Ed.  Chill's signing skills were put to good use in a few films and he made some records as well. If you are so inclined, go to Youtube and take a look at Chill doing the song Mama, possibly the most depressing ditty I've ever heard.

Posted by 1001: A Film Odyssey is produced, directed and written by Chris, a librarian. at 9:52 PM