I've decided to go through most of my remaining Hollywood movies from the 50's from the 1001 list this month. I'm also giving out my Elisha Cook Jr. supporting player award for each film because I feel it was really a golden age for great supporting players and I find it fun to do so. 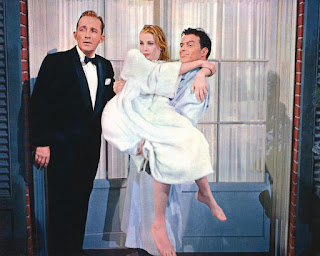 The Philadelphia Story had a pretty unbeatable trio of players (Cary Grant, Katherine Hepburn and James Stewart), but High Society, the musical remake didn't do too bad either with the trio of Bing Crosby, Grace Kelly and Frank Sinatra. The movie gets by on its star power and has some good musical numbers and the collaboration of Sinatra and Crosby is certainly noteworthy. Crosby does seem a wee bit old to be Kelly's ex, but it also seemed unlikely that she would leave movies shortly after this to become Princess of Monaco. So you never know. 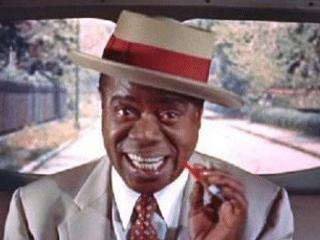 But the player that really sets High Society apart Is Louis Armstrong. Louie and his band performs as a kind of Greek chorus of the events around them and the film gets a shot in the arm every time he hits the screen. His numbers with Bing Crosby are also the musical highlights of the film for me. My only objection is the gaps between his appearances on screen are too long.
Posted by 1001: A Film Odyssey is produced, directed and written by Chris, a librarian. at 12:06 PM