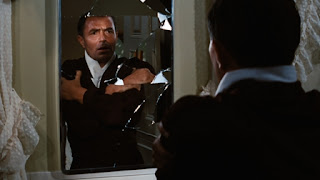 Nicolas Ray's Bigger Than Life is the story of a professor (James Mason) who goes through a medical treatment for a grave condition and becomes addicted to cortisone. His personality changes and he slowly becomes a threat to his family and himself. This is a film that you can look at and perhaps overlook some of the subtext of the film that shows that all may not be so hunky dory in 50's middle America. Bigger Than Life artfully uses milk as a metaphor several times to perhaps represent the professor's way of life slowly spoiling or showing financial problems that one might not assume a respected teacher of this era to have. Many of these elements Ray employs are not clear in an obvious way and makes Bigger Than Life a good candidate for multiple viewings.

Speaking of the 50's...Look fast for a bit part from a Pre-Leave It to Beaver Jerry Mathers.


And the Elisha Cook Jr. supporting player award goes to..Walter Matthau. It's funny seeing Matthau in a role that is dramatic without much of his trademark comic sense that he would display during the 60's and 70's. We even see him as a tough guy in a fight scene without any comic overtones! And speaking of subtle touches, it has been pointed out that Matthau's character Wally Gibbs is probably a homosexual, but in 50's Hollywood you had to present this in the subtlest of subtle terms.