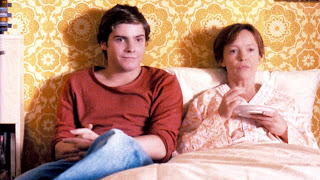 
Goodbye, Lenin is a comedy with many dramatic elements about a young man (Alex), who during the time of the unification of Germany in the late 80's witnesses his mother (Christiane) have a near fatal heart attack and lapse into a coma. When she comes out of it a few months later, Alex tries to keep it a secret from his mother that Germany is now unified, afraid the shock might kill her. The lengths that Alex goes to keep this false narrative going reminded me of one of my favorite movies, The Truman Show.

The Truman Show is the story of Truman Burbank, an insurance salesman with a wife living a seemingly normal life in a seaside community called Seaview. Except the only thing real about Truman's life is Truman himself. All that goes on around him is part of a TV show called The Truman Show, with everyone in Truman's life being actors, all under the control of a producer named Christof.

There are a lot of similarities and a few differences in both films.
Here are ten off the top of my head.

1. Both films rely on a lot of coincidences. Goodbye, Lenin has Alex coincidentally having the nurse (Lara) of his sick mother be a woman he was separated with during a street demonstration earlier and later becoming his girlfriend. In the The Truman Show (TV show). Truman meets his future wife by her hurting her ankle and landing in his lap. This of course, was manipulated by the show's script writers.

2. The show within the movie of The  Truman Show is watched by millions of people. The special show put on for Christiane in Goodbye, Lenin is for her only.

3. Alex and Truman are both separated from their father when they are young. Both are reunited with him later, discovering the disappearances of both dads were caused by factors other than what they first thought.

5. Alex's friend Denis utilizes old news footage and fake reports for Christiane to watch. It is amateurish, but it works. Christof the producer of The Truman Show (TV show) runs the most elaborate and expensive television show ever created.

6. Christiane finds out the truth late in Goodbye, Lenin and turns out to be okay with it. She acknowledges her love for her family before dying a couple of days later. Truman finds out the truth at the end of the movie, moons Christof and goes to the outside world.

7. You can look at The Truman Show (movie) as an indictment of capitalism (By what ratings and chasing profit makes them do to poor Truman) or of religion (The manipulative omnipresent producer is named Christof for goodness sake!) Goodbye, Lenin's politics seem to be more pro-Capitalism, (the East German stuff wasn't nearly as good as the new stuff) but that is debatable.

8. Both have fine comic moments drawn from the absurdities of their situations and make you wanna cry at other moments.

9. At the end of Goodbye, Lenin, Alex recounts that the country his mother thought she lived in never really existed the way she imagined. At the end of The Truman Show (movie), Truman realizes that the only part of the life he led that was real was himself.

10. At the end of Goodbye, Lenin, Alex's family shoots the mother's ashes into the sky and wonder whether or not she is looking down on them.  At the end of The Truman Show (movie), two of Truman's fans search for something else to watch on TV. 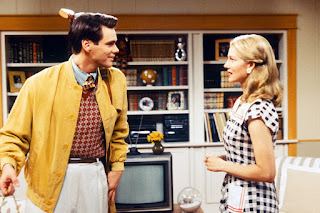 Truman (Jim Carrey) and his fake wife (Laura Linney)
in fake surroundings in The Truman Show
Posted by 1001: A Film Odyssey is produced, directed and written by Chris, a librarian. at 4:00 AM