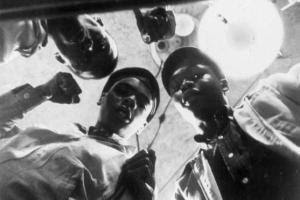 
The Cool World, Shirley Clarke's 1963 film about life in a gang on the streets of Harlem comes across so realistically at times that it has the feel of a documentary where we are following around the characters in the film and just observing whatever they do. It makes you feel that this is happening right in front of you and we are just voyeurs peeking into their tragic lives. The dialogue seems real...so real in fact that we miss a lot of it. But that's kind of the point, isn't it? The whole drama comes across as a giant jazz riff to me and due to the setting and portrayals of the film, that is also on point. No need for stylized Hollywood product here. 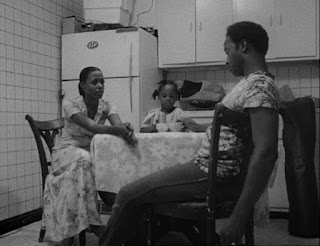 Charles Burnett's Killer of Sheep certainly isn't anything close to stylized Hollywood product either. The main character named Stan (Henry G. Sanders) has a thankless job working at a slaughterhouse in Watts. We see the events of his life unfold with his wife and kids, shady friends, the law and no easy paths to anything that he really wants.The film has no great tragedy to propel the plot. The tragedy is the futility and hopelessness of the lives of many of the characters. This is summed up for me in the scene where Stan and a friend struggle to carry down a motor down a flight of steps to load up in his truck to take it to resell. When he starts the truck, the motor falls off the back, breaking it. Kids playing in makeshift playgrounds where buildings are being put up (or torn down) seem to be the freest and happiest in this somber but moving movie.
Posted by 1001: A Film Odyssey is produced, directed and written by Chris, a librarian. at 5:00 AM