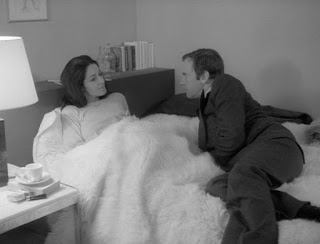 "You're very sexy Maud, but what I really want
to know is how you feel about existentialism."

My limited two movie experience with Eric Rohmer films (A Tale of Winter being the other one) leads me to believe Rohmer likes films about relationships. Pretty complex relationships. Felicie in A Tale of Winter has a long lost love that she still pines for despite having two present relationships that are semi-successful.
My Night With Maud also presents lead character Jean-Louis with a choice. He has spotted the girl he wants to marry, but ends up spending the night with Maud, the girlfriend of his Marxist pal, Vidal. By spending the night, I don't mean sex. Not exactly. Jean-Louis keeps his clothes on...but Maud's naked...I think. Vidal has gone. Meanwhile, after leaving Maud's place, Jean-Louis runs into the girl he wants to marry again. Her name is Francoise. They eventually do get married and have kids and run into Maud on the beach about five years later. It's interesting in Rohmer's films (I'm only going by the two) how the characters talk a great deal about literature and philosophy. I've never seen a movie with a romantic plot have the characters discuss Pascal's Wager in such detail! But I rather like that about these films. The dialogue doesn't do as much for plot as it does form character. I think they succeed in that way. However, not everyone agrees... 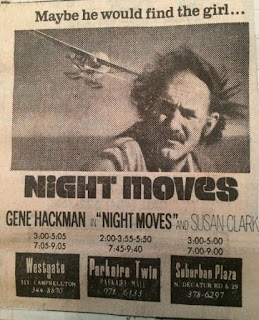 ...One example for someone who disagrees be might  be Alan Sharpe, the screenwriter of the 1975 American film Night Moves. Night Moves is a quirky thriller with lots of twists (and not a lot of talk about French philosophers from what I remember). There is a scene in Night Moves, where Gene Hackman is talking to his ex-wife Susan Clark. He actually brings up Eric Rohmer films! But not in a good way. He says something to the effect that watching a Rohmer film is like watching paint dry. The Hackman character seems to want to emphasize this point so much that he even repeats how much he hates Rohmer! I'm attributing this line to Sharpe, but for all I know it was added in by director Arthur Penn or ad-libbed by Hackman himself.

Interestingly, both My Night with Maud and Night Moves have achieved a certain cult status...and my personal celluloid version of Pascal's wager is that I like both films....just in case I'm wrong about one of them. 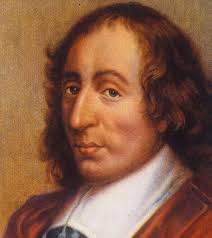 Blaise Pascal
Posted by 1001: A Film Odyssey is produced, directed and written by Chris, a librarian. at 5:00 AM