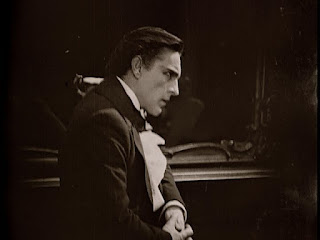 John Barrymore and his great profile
as Dr. Jekyll

Today's super scary Halloween triple feature features films that were made about 100 years ago as I look at the old Gregorian calendar on the wall. Isn't that pretty scary in itself?

The first film is Dr. Jekyll and Mr. Hyde, starring screen legend John Barrymore. The film is of course based on the 1886 Robert Lewis Stevenson book of the same name. Barrymore plays the good Dr. Jekyll who helps out the poor when he isn't doing experiments that may give him answers to questions that may be left unanswered. He is egged on by his future father-in-law to search for the dual nature of good and evil in man, and boy does he find it! He finds a potion that turns his saintly doctor Jekyll into the wicked Mr. Hyde. (Granted, Mr. Hyde might be more fun than Jekyll at the right type of party). Then the fun begins as Mr. Hyde causes havoc much to the consternation of his better half. You know this isn't going to end well.

The special effects aren't too bad, especially the shots of the difference between Dr. Jekyll's skilled doctor hand and the claws of Mr. Hyde. I also like Hyde's distorted looks, which are grotesque but clearly still human and quite the contrast to the actor known as "The Great Profile." 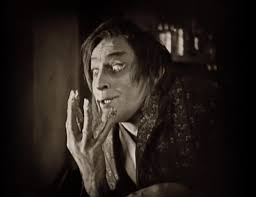 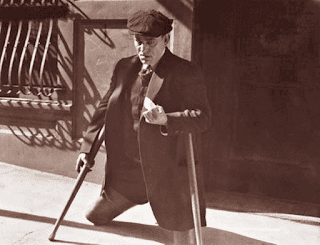 Lon Chaney as Blizzard in The Penalty

The Penalty, directed by Wallace Worsley, is a melodramatic but involving tale of a boy who has the lower part of his legs removed by doctors he overhears saying afterward that the removal may not have been necessary. He grows up and takes the name Blizzard and becomes a bitter criminal mastermind who wants to get revenge on the man who took his legs.

The film ends with his blackmail of the doctor to give him legs, but the doc operates on his head instead. Blizzard's mind is now cleared of evils thoughts and he tries to do good, but is shot down by an associate, the ultimate paying of the penalty.

Blizzard is played by Lon Chaney, who was and is one of the most admired stars of the silent era. His ability to get into a role physically as well as mentally is renowned. The Man of 1,000 Faces uses his own face for The Penalty, it's his body that is the distortion here. For this role, he had his legs strapped as his knees sat in buckets to mimic being an amputee. 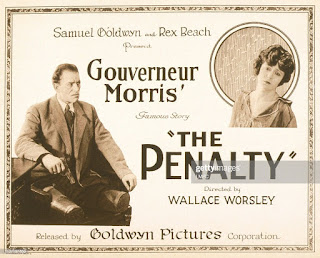 Chaney also starred in an adaptation of another
Gouverneur Morris story
called  Ace of Hearts  in 1921. 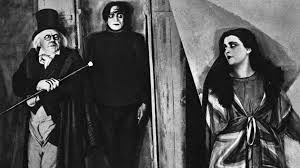 The unveiling of the somnambulist Cesare by
Caligari in The Cabinet of Dr. Caligari

The alliteration of those names helped me to remember them all for my History of Film class I took in the 80's when we went over silent films, expressionism and The Cabinet of Dr. Caligari in particular. But what are the importance of these names? Herman Warm designed the delightfully expressionistic sets for the movie. Rohrig and Weinmann painted these sets. And Robert Weine was the director of this tale of madness...exploitation...and SONAMBULISM!!

But the film offers more than it's unusual design. It is the forerunner of films that try to throw the viewer narrative curve balls. Is the story we think we are seeing, the real story? Is the narrator reliable? Is the one we see as evil, really good? Or is the narrator the only one who sees that he isn't good? What are the hints that what we are seeing isn't what we may think it is at first?

I think of Caligari when I see films like A Beautiful Mind, The Sixth Sense and most recently Shutter Island (I'm sure Martin Scorcese is a student of Caligari). Even if you've seen variations on the themes of Caligari done many times since, any student of film should see the original.

I had the privilege of re-watching Caligari this month at the local Crescent Theater featuring the live band The Invisible Czars playing along with the film. Great job, guys! 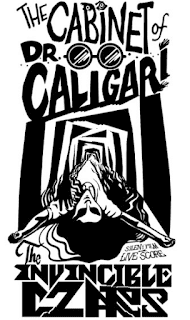 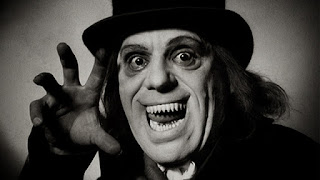 Happy Halloween!
Posted by 1001: A Film Odyssey is produced, directed and written by Chris, a librarian. at 6:00 AM