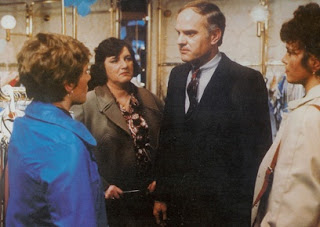 
A Question of Silence is a story of three women. One is a seemingly happy, plump middle aged waitress. But is she really happy? She's alone and perhaps she isn't really as contented as she seems. Another is an attractive office assistant. Her boss relies on her to run the office, but seems to have little respect for her ideas. The third is a housewife with a family. The three women don't know each other but find themselves at a dress shop one day. The housewife attempts to steal a garment and is approached by the owner. The three women converge of him and...well, they beat him to death.

The women are in custody and are interviewed by a female criminal psychiatrist named Janine. Janine tries to understand them at first and actually comes to sympathize with them as time goes on.

A feminist parable to be sure. What is the director/writer Gorris trying to say? And should a man watch this with a different eye than a woman? I'm not sure, but I don't think anyone watches A Question of Silence and says, "Wow, that was entertaining!" Of course, it wasn't meant to be. 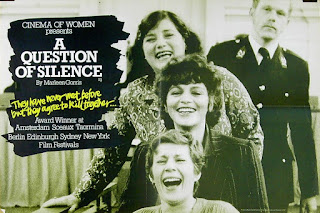 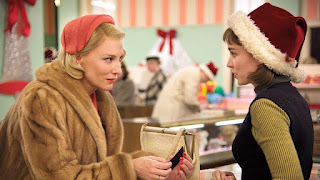 We recently read the 1952 novel The Price of Salt by Patricia Highsmith for my book club. It is the story of a young lady named Therese who slowly becomes enamored by an older married woman named Carol. It is a book that really delves into Therese's thoughts and somehow makes intricate details and mundane thoughts interesting. I actually liked this book more than some of the women in my book group who thought she relied on this detail too much and neglected getting on with the story.

Having read the book makes the praised film adaptation Carol interesting. I've seen it before, but looking at it right after reading the book makes it seem somehow less than when I first saw it. Granted, film is a different medium and taken as a stand alone without knowing about the book, it is a pretty good study of these two women. It also recreates the time well and Cate Blanchette and Rooney Mara are good in the lead roles.

Overall, the story is about a clear love between two women that can not be expressed because of the time and the situation they are in. But the end surprisingly does give them and the reader (or viewer) hope that they can both ultimately be happy. 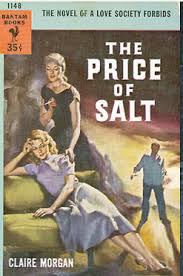 The Price of Salt
(listed under Highsmith's alias
Claire Morgan)
Posted by 1001: A Film Odyssey is produced, directed and written by Chris, a librarian. at 1:38 AM