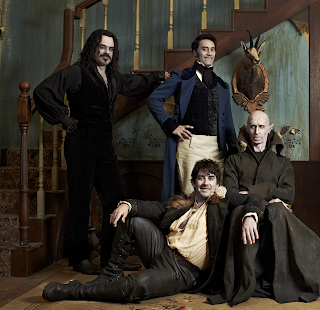 The vampire crew in What We Do in the Shadows

New Zealand director Taika Waititi's cult film What We Do in the Shadows is a most amusing mockumentary about vampires. These vampires aren't particularly menacing, in fact, the vamps in the film are living together and mostly have to do humdrum thing like doing the dishes or deciding what to cook for dinner. They also experience difficulty with getting into clubs because vampires can't go into places unless they are asked and have trouble dressing because they can't see themselves in a mirror! It's a fun film. 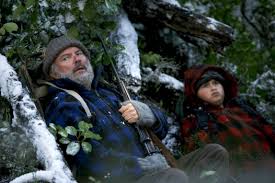 Sam Neill and Julian Dennison
in Hunt for the Wilderpeople


Another Waititi film that is quite charming is Hunt for the Wilderpeople. The film begins with an older couple, Bella and Hector Faulkner (Sam Neill, Rima Te Diata) who live near the bush in New Zealand that adopt a largely unwanted 13-year-old orphan named Ricky Baker (Julian Dennison). Things seem to be just starting to work with the three of them when Bella suddenly drops dead. Hector tells Ricky that it was Bella and not him that wanted to adopt him and this leads to Ricky running away into the bush. Hector goes after him, but the their journey into the bush becomes quite an adventure when they get lost and Hector is suspected of kidnapping Ricky. They meet several interesting creatures and people in the woods, my favorite of which is a woodsman named Psycho Sam. This is a very charming and likable film. Two for two so far. 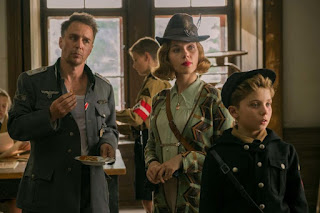 
Jojo Rabbit is Waititi's first film to get a Best Picture Oscar nomination. The black comedy is about a young boy named Jojo in World War II Germany who learns to be a good Nazi by having the imaginary presence of Hitler encouraging him along the way. Jojo's Nazi ways are challenged by the fact that his mother (Scarlett Johansson) is a collaborator with the enemy who keeps a Jewish girl (Thomasin McKenzie) hidden in their house. Jojo comes to like the girl and the film has a lot of moving moments, as well as some pretty funny ones. 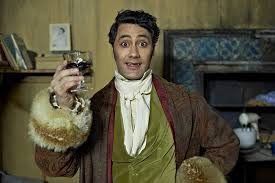 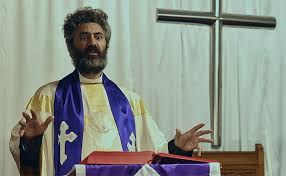 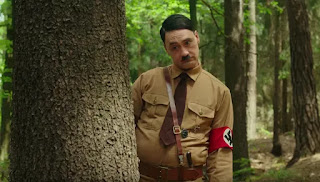 And finally, Waititi cast himself as the menacing
and more than a bit goofy imaginary version
of Hitler in Jojo Rabbit
Posted by 1001: A Film Odyssey is produced, directed and written by Chris, a librarian. at 2:36 AM