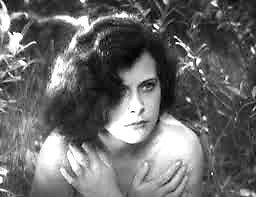 
The Czech film Ecstasy is a somewhat puzzling film to watch. It is about a bride named Eva who is on her honeymoon with her older husband named Emil and suddenly realizes she doesn't love him and leaves him to go back to the comfort of her family. While swimming and chasing a horse before she is able to get her clothes on she meets a builder who eventually becomes her lover. Emil eventually comes back to try to reconcile with Eva and complications ensue.

Ecstasy director Gustav Machaty and his cinematographer definitely have some cinematic skill with their often offbeat camera angles and slow pacing. The film itself often plays like a silent, with minutes between dialogue even though sound had been around for several years when this film was shot! It's not a bad film now that I think about it, but there's really only one reason it's remembered today.

Heddy Lamar: Eva is played by Austrian Hedy Kiesler, who later became famous in America under the name of Heddy Lamar. Her scene when she is running after her horse in the nude was considered quite scandalous at the time, but it did give her some attention which later led to her emigration to the United States and becoming a star for MGM studios in the 40's. Heddy Lamar using her body
in Sampson and Delilah

Samson and Delilah was one of the biggest hits MGM and director Cecil B. Demille had during the 1940's.
Heddy Lamar played the seductive temptress Delilah and she did indeed have looks to kill for...or at least get your haircut for. I actually liked this film more than I thought I would (I think I'm just growing soft for old movies). The final destruction of the temple as well as other action scenes (such as Samson kicking ass with the jawbone of an ass) makes for a pretty good spectacle and Lamar's co-star Victor Mature is able as the mighty Samson. We also have on hand a young Angela Lansbury as Delilah's sister and the always wonderful (to me) George Sanders as the Saran. 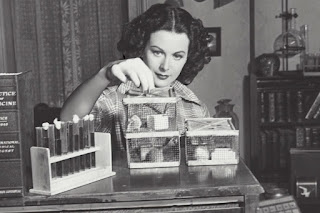 The last film of my Heddy Lamar triple feature is the documentary Bombshell: The Heddy Lamar Story. This film shows Heddy's rise from a Czech ingenue to a major Hollywood star, her many marriages and the many peaks and valleys of her career before becoming a recluse later in life.

One of the noted aspects of this documentary is showing Heddy's...brain. She is credited (or maybe not credited enough) with the development of "frequency hopping"to prevent enemy subs and such for picking up on messages delivered to allies during World War II. She and George Antheil were awarded a patent on this in 1942 and was used as a valuable tool in keeping transmissions secret in subsequent years (and wars.) 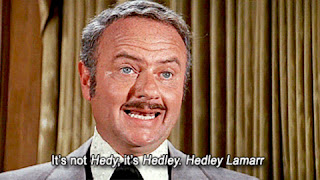