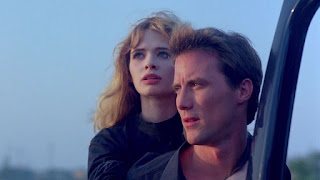 Adrienne Shelly and Robert Burke
seek out The Unbelievable Truth

Director Hal Hartley's three decade (so far) career as an indie film director began with his 1989 film The Unbelievable Truth in 1989. It's a story about a mechanic named Josh (Robert Burke) who returns to his hometown after a stretch in prison for a murder he may or may not have committed. He gets involved with Audry (Adrienne Shelly), the daughter of the owner of the garage where he lands a job. It's a nice little film with interesting plot twists and characters and I really have to give credit to any film with a budget of $75,000 (even in 1989 dollars). 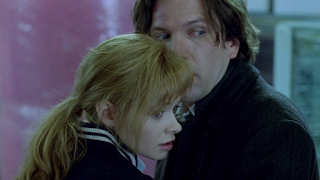 Adrienne Shelly and Martin Donovan
learn to Trust each other

Trust is Hal Hartley's low-budget romance about a pregnant high schooler named Maria that accidentally kills her dad, gets banished by her mother, dumped by her boyfriend, survives an attempted rape in a store...before hooking up with a electronics repairman named Matthew whose main character flaw is that he is too ethical to hold a job. Matthew has parental problems of his own with his oddly controlling father. The characters of Maria and Matthew grew on me after awhile (especially Adrienne Shelly as the girl) and the film has some nice touches of dark humor and some poignancy as well.

Leading lady Adrienne Shelly later became a director in her own right (Waitress), but her promising career was cut short by her tragic death in 2006 at the age of 40. 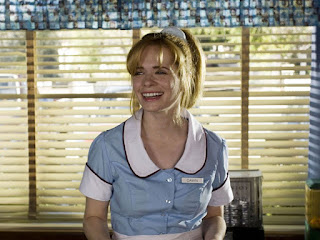 Adrienne Shelly in Waitress
Posted by 1001: A Film Odyssey is produced, directed and written by Chris, a librarian. at 6:02 PM