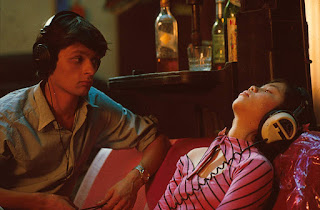 Diva is the story of a young Parisian postman who literally bumps into a prostitute with an incriminating cassette tape that she hides in Jules's moped. The prostitute is killed and Jules finds he is quickly in over his head in a situation not of his choosing. The plot of the film also involves Jules's obsession with an classical singer named Cynthia Hawkins who never lets herself be recorded. Ah! But Jules has a bootleg recording of her, which he listens to constantly. So essentially Jules has one recording he loves and another one that he wants no part of.

This engaging French thriller reminds me a great deal of some of Alfred Hitchcock's movies that feature an everyman that gets involved in a situation way over his head, such as The Man Who Knew Too Much. That film also had a similar musical tie-in in the plot. 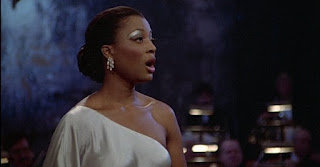 I wanted to team Diva up with a Hitchcock film that I hadn't seen before, so I chose Saboteur, a 1942 film which also features an average guy that gets involved in a situation over his head.

Aircraft factory worker Barry Kane (Bob Cummings) is an average Joe that is falsely accused of setting a fire at the factory that killed a friend of his. He is sought by police and ends up on the run, but has a clue about the identity of the real culprit, a man named Fry (Norman Lloyd). The acts of sabotage turn out to be much bigger than just Fry, which Barry discovers a little bit at a time. He also picks up a blonde (Priscilla Lane) along the way who wants to turn him in at first, but of course later becomes an ally.

The film culminates with a memorable scene with Fry dangling from the Statue of Liberty with Barry unsuccessfully trying to save him.

Saboteur isn't top twenty Hitchcock, but it's not bad either. It does seem like a bit of a test film in retrospect for Hitch's later North by Northwest. Bob Cummings and Priscilla Lane aren't Cary Grant and Eva Marie Saint, but they're likable and effective enough. And the conclusion on top of the Statue of Liberty is good, just not as good as the Mount Rushmore finale of North by Northwest. 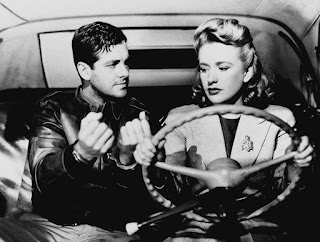 Bob Cummings and Priscilla Lane have issues
in Saboteur


As in many Hitchcock films, we do have many memorable supporting players. I especially like the truck driver looking for excitement that helps Barry escape from the police. Otto Kruger plays a sophisticated villain here...Otto seemed to played a sophisticated villain a lot. Also on hand are Vaughan Glaser as a blind man that also helps Barry and a train full of circus performers who debate between themselves whether or not to turn in our fugitives.

My favorite of all of the supporting players is Norman Lloyd as Fry. Norman became a frequent Hitchcock collaborator throughout his career. I know him best in later years as Dr. Auschlander from St. Elsewhere. Norman provided insights on the commentary track of Saboteur and he mentioned that Hitchcock felt it was a mistake to have the bad guy in peril at the end of the movie because the audience isn't really invested as much on whether or not he falls as they would be if it were the hero. This is another improvement the director made in North by Northwest.

As of this writing, Norman Lloyd is still alive at age 105 and comes across in his commentary as an extremely charming guy. 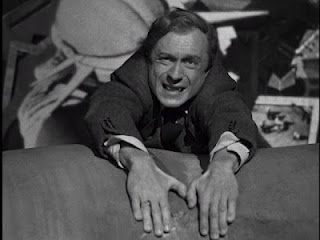 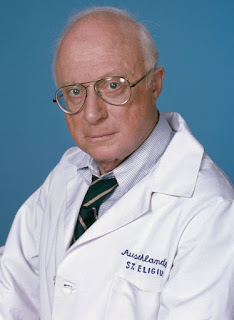