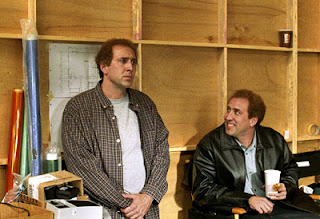 Let’s see if I have this straight. Charlie Kaufman is the real life screenwriter for the film Being John Malkovich. Susan Orlean is the real life author of The Orchid Thief. Charlie adapted Susan’s unadaptable book as a screenplay for the film Adaptation. Charlie and Susan are both fictional characters in Adaptation, where Susan is having an affair with John Laroche, the subject from her original book. And that Susan Orlean, she's still writing! Shouldn't she be in jail?, I saw what she did to Donald in the movie! Wait, that didn't really happen. And is Charlie’s twin brother Donald even real? Apparently not, which is too bad since he seems like such a likeable guy. I’m thinking of “adapting” an imaginary twin into my life that will support me through all my endeavors.
Posted by 1001: A Film Odyssey is produced, directed and written by Chris, a librarian. at 6:00 AM