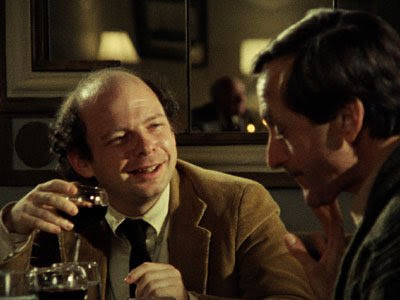 What can you say about My Dinner with Andre? I never saw it until about a year ago. I always knew it as the movie where two guys talk at dinner and…well, that ‘s pretty much it. Whether on The Simpsons, Mystery Science Theater or the My Dinner with Andre action figures from Waiting for Guffman, Andre has been an easy target to poke fun at.

The question is, is it good? Or is it pretentious? Or is it longwinded? Or is it interesting?
Yes, to all these questions.
What about Andre and Wally? Are they likable?
I found Andre to be a rather interesting guy to listen to…for awhile. He goes on for about half the move about his experiments in the Polish woods with a performing troop, eating sand in the cold Sahara desert with a Japanese Monk (We’ve all had that fantasy, haven’t we?), surrealist magazines from the 20’s apparently put together by psychics, among other stories.

When Andre’s tales begin to get a little long, the film wisely changes gears and the happy-go-lucky Andre seems to transform into a manic-depressive who compares himself to Albert Speer, compares ALL of us to zombies in a trance going through the motions of our daily life, and tells Wally how comfort separates us from reality. He even compares New York to a concentration camp where the residents are their own guards who won’t allow them to escape

Wally is a little more down to earth, but he too is the artistic type. At one point Wally tells Andre, “I really don’t know WHAT you’re talking about!”
If Wally has his theater reviews, electric blanket, cup of coffee without a roach in it and Charlton Heston autobiography, he’s happy.

I actually like this pair: Andre Gregory, the gregarious intellectual, and Wallace Shawn the whiny, but likeable playwright. I give the film and director Louis Malle credit for doing something different pretty successfully. And if you’re ever on Jeopardy and the answer comes up “Main course served to Andre and Wally during My Dinner with Andre, the question is “What is Quail.”
One more thing, this film is not actually one of the “1001 Movies You Must See Before You Die,” so I’m technically cheating with this entry. I do think something this original SHOULD be on the list. I’ll try to stick with the “1001” entry script, but it looks like I’m prone to an occasional deviation.
Posted by 1001: A Film Odyssey is produced, directed and written by Chris, a librarian. at 8:27 PM