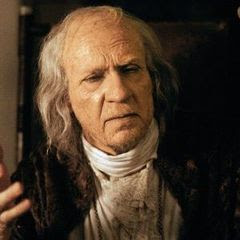 The first step of my 1001 rung ladder was for one I’ve already seen two or three times before and have certainly enjoyed, “Amadeus.”


It's hard for me not sympathize a lot with Mozart’s rival Salieri, because of his great desire to be a composer for God, and having to deal with this talent instead being dispensed to the vulgar young Mozart.

Sure it’s fictional, but if you can get past that fact, there’s a lot to be enjoyed here.The operatic recreations such as Marriage of Fiagro and Don Giavonni are a fun even for a non-opera buff. The recreation of Viennese society is impressive too. Milos Foreman has directed several of my favorite films, the others being “One Flew Over the Cuckoo’s Nest,” “Man on the Moon,” the underappreciated “Hair,” and “The Fireman’s Ball,” which I honestly don’t remember a whole lot about. I really took notice of the fine supporting cast this time out. Jeffrey Jones as the emperor (“Well, there it is.”) and Roy Dotrice as Mozart’s father stand out. Two of the emperor’s court, played by Patrick Hines and Jonathan Moore, I recognized as Continental Congressmen from one of my favorite musicals, “1776.”

The casting of the two unconventional leads was successful. F. Murray Abraham was not that well known to moviegoers at the time and Tom Hulce was best know as Pinto from “Animal House.” Abraham, I thought, won a well deserved Oscar for Salieri and Hulce was surprisingly good as Amadeus. And who could forget that laugh?
Favorite part of the film? The collaboration between Mozart & Salieri on the Death Requiem.
Did it deserve to win best picture? There were other good movies that year, including “The Killing Fields,” but I would still go with Amadeus. Mediocrites everywhere. I absolve you all!
Posted by 1001: A Film Odyssey is produced, directed and written by Chris, a librarian. at 10:06 AM