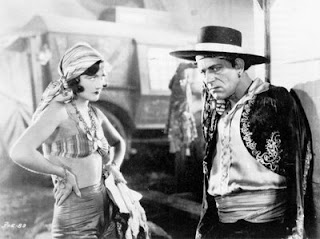 TCM put out a DVD a few years ago under the title the Lon Chaney Collection, which featured Ace of Hearts, Laugh Clown Laugh and The Unknown. Ace of Hearts might seem a bit melodramatic, but I really like the film. You got to love a lovelorn anarchist. It’s also one of the few surviving Chaney films from the early 20’s. Laugh, Clown, Laugh is even better, featuring Chaney as the (still) lovelorn clown Flik.

The film of this trio that is listed in “1001 movies,” that was the most disappointing was The Unknown. That isn’t to say I didn’t like it, in fact, I liked what was there so much that I was disappointed there wasn’t more. Coming in at 63 minutes running time, (Some parts are apparently lost)the movie seems very fragmented. I think the film really needs these missing scenes even though the film commentary says otherwise. But what is there is worth seeing. Chaney as Alonzo the armless, diabolical murderer hiding the fact that he has arms and a double thumb which would implicate him in a murder, Chaney smoking and eating using his feet (though not actually Chaney, but stunt feet!) and not to mention an extremely young Joan Crawford as the love interest.

Since most of Lon Chaney's films are no longer with us, I think in the next Indiana Jones movie, Indy should go in search of missing Chaney films. "Indiana Jones and the Flammable Nitrate Film Stock!" Just a thought.
Posted by 1001: A Film Odyssey is produced, directed and written by Chris, a librarian. at 8:35 PM