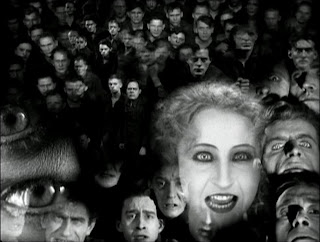 Those big bold eyes of Brigitte Helm. The beautifully symmetrical head. This is the lasting image for me from Fritz Lang’s Metropolis. In her role of Maria, Brigitte has to be a convincing spiritual leader, yet mesmerizing enough for John Frederson’s son to fall in love with her and then be a robot that is pure evil and deception. She does all this perfectly. According to IMDB, she didn’t continue her career after 1935. Too bad.

Properly regarded as one of the first great Science Fiction films, though its legacy may be seen more in films about worker rights like Norma Rae rather than latter day Sci-Fi films such as The Fifth Element. “There can be no understanding between the hands and the brain unless the heart acts as mediator.” This theme is pounded home again and again in this film and presumably Thea Von Harbou’s novel as well.

I first saw this film at Ansley Mall in Atlanta when it was re-released in the mid 80’s. The older DVD copy I have isn’t exactly top quality and I have no idea what the story is with the music. During the most dramatic parts of the movie, I have to hear Mendelssohn. Symphony No. 4, which is so associated with the bicycling movie Breaking Away that it seems horribly out of place here.

Gerald Mast in “A Short History of Movies” sees a lot of problems with the film. He calls Metropolis, “a series of stunning pictures with the silliest, wateriest intellectual and dramatic paste holding them together. Well, Hitler did like it and Queen used it as background for their video for Radio Gaga. I forgot my point.

“1001 Movies” states there is a newly restored version out that has been out in recent years. Hopefully, this version also has a new score.
Posted by 1001: A Film Odyssey is produced, directed and written by Chris, a librarian. at 4:06 PM