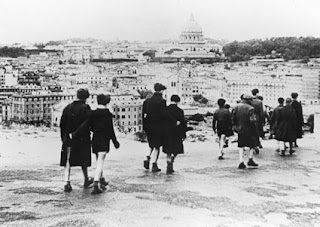 So what the heck were the post-WW II neo-realistic filmmakers trying to do? Scenarist Cesare Zavatini defines these films as trying “to show things as they are, not as they seem; to use facts rather than fictions; to depict the common man rather than silken heroes; to reveal the everyday rather than the exceptional; to show man’s relationship to his real society rather than to his romantic dreams.” The films also show “unjust and perverted social structures threaten to warp and pervert the essential and internal human values.”

Roberto Rossellini’s Open City is generally regarded as the first of these films and it is very gritty and at times powerful. We can certainly root for the brave members of the resistance, including the local priest, fighting stealthily while under the thumb of the Third Reich. The sacrifice for others is shown over and over again here: The widow Pina working to provide for her family, the resistance fighters not giving away information despite being tortured eventually to death and the priest, who gives the children of the city the strength through his death to persevere in the soon to be opened city, we can hope.

Among the standout perfomers are Anna Magnani as Pina, Aldo Fabrizi as the Preist and Harry Feist, whose sleezy Nazi should be the measure to which all sleezy Nazis in film should be measured against.

A sometimes-hard film to watch is not quite as effective to me as De Sica’s “The Bicycle Thief” but is certainly a strong and important movie in it own right.
Posted by 1001: A Film Odyssey is produced, directed and written by Chris, a librarian. at 9:06 PM