The year is 1975…and…
I cut out and pasted movie advertisements in a spiral notebook during that transitional movie year all those many, many movie years ago. Looking at it now, much of the print from the faded pages has yellowed, but yes, I still have it! So I’ve decided this month to stroll down memory lane and comment on some of the film ads from my movie scrapbook.  I’ll also try to fit in a suitable 1001 movie entry at the end of each post since that is still the point of this blog.

Yes, I admit that I looked forward to every new disaster movie release doing this time. Airport in 1970 was really the first of the genre. It was followed in 1972 by The Poseidon Adventure. But really 1974/1975 was the disaster movie epi-center. The Towering Inferno, Airport 1975 and Earthquake were really the disaster trilogy here. A few came after, but the disaster movie really was past its peek by 1976. But the legacy of Irwin Allen lives on in expensive but cheesy Michael Bay action movies of today. 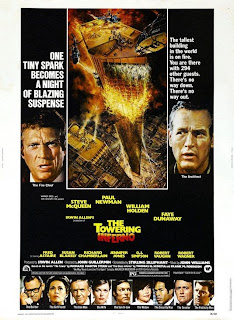 I made an earlier post this month on "movies with the cast and the bottom (or side) of the ad. Well, pretty much every disaster had their all-star cast aligned here. Steve McQueen is The Fire Chief and Paul Newman is the Architect! One Tiny Spark Becomes a Night of Blazing Suspense.The world's tallest building on fire. You are there on the 135th floor...no way down...no way out. Probably my favorite of the disaster movies of the era. The cast at the bottom of the ad includes O. J. Simpson as a security officer, Fred Astaire as a con man, and Robert Vaughn/Robert Wagner as two guys I remember having difficulty telling apart at the time. 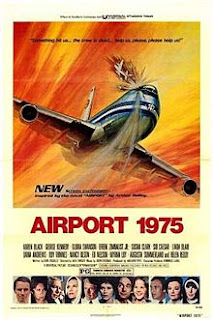 The ad for "A75" has the streak of a private plane plowing into the cockpit of a 747. The cast at the bottom of the ad includes a post Exorcist Linda Blair (whose role as the sick girl on the plane can no longer be seen by me as anything but source material for the similar character in Airplane!), Gloria Swanson (I can't remember if she was playing Norma Desmond or not), Sid Caesar (who has the movie's signature line, "The stewardess is flying the plane!"), and Helen Reddy as a nun (I Am Woman, indeed!)

Point to ponder: Why was George Kennedy in all four Airport movies and Earthquake? I have nothing against George Kennedy, just wondering. He seemed like a logical canidate for Zucker and Abrams to cast in Airplane!, but it was not to be. Zucker/Abrams made up for this oversight by casting George in all of The Naked Gun movies. 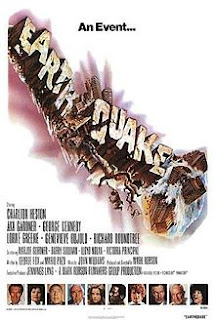 Pretty cool ad of the word Earthquake with the city coming apart and people falling out of the letters. But once again, we have the cast at the bottom of the ad which include former child preacher Marjoe Gortner, Richard "Shaft" Roundtree as the motorcycle stuntman with the cool name of Miles Quade, French-Canadian beauty and one of my personal hearthrobs Genvieve Bujold, Victoria Principal whose most memorable scene is modeling an undersized Miles Quade t-shirt, and of course, George Kennedy as the Beaver. 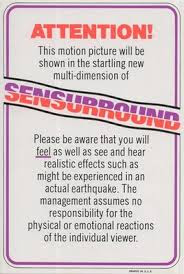 When I saw this movie for the first time I was promised the excitement of Sensurround! in the theater. The floors were supposed to shake and you, yourself would feel you were right in the middle of an actual earthquake! Well, Sensurround! was noisy, irritating and made me wish the quake scene would end so I could go on to the next scene without Sensurround!. But maybe it was just the theater, I thought. So I went to see Earthquake again a few weeks later at the late great Emory Cinema, but alas, Sensurround wasn't any better there. 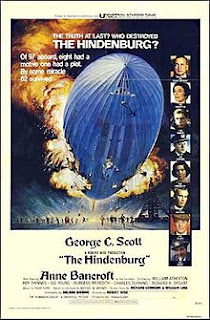 I confess that The Hindenburg was one I never got around to seeing. The ad asks The truth at last! Who destroyed the Hindenburg? The cast at the bottom (whoops, looks like they're on the side of the ad this time) and once you get past George C. Scott and Anne Bancroft, this all-star cast doesn't seem quite as all-star as some of the others of the type. I mean, Charles Durning, Roy Thinnes and William Atherton? 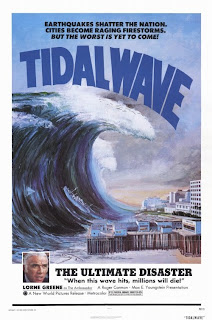 The blame is on me for being such a disaster movie fan, that I went to see this stinker. The ad looks great: A giant tidal wave about to engulf the city. Earthquakes shatter the Nation. Cities become Raging Firestroms. But the worst is yet to come! If the ad were truthful, it would have said. “Tidal Wave takes advantage of disaster movie craze with poorly dubbed, low budget Japanese flick released with unrelated scene with Lorne Greene tacked on. Moviegoers ask for their money back!” 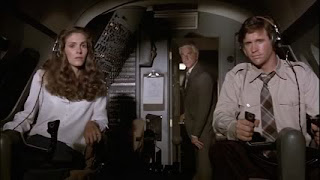 I know putting a movie that came out in 1980 is probably cheating to define as a 70's movie experience. But none of the disaster movies with the cast at the bottom of the ad made the 1001 movie cut.* So, I've got to cut corners and list the parody that did make the 1001 list.

I still remember going to a lot of  movies during the summer of 1980. There was Dressed to Kill, The Shining, The Empire Strikes Back, Xanadu…ok, maybe not Xandadu. But with all due respect to Yoda, the Overlook Hotel and Angie Dickinson's naked body double, the movie of the summer of 1980 was Airplane!

It came at the right time for me. As I mentioned, I grew up with the previously mentioned disaster movies, but the formula had run pretty stale at this point and the team that brought you Kentucky Fried Movie, now brought you a parody of the genre (though technically a parody of the 50’s straight film Zero Hour! which I unsuccessfully tried to watch years later without reciting Airplane! lines back at the screen.) With a plethora of quotable one-liners.

You ever seen a grown man naked?

Surely you can’t be serious! I am serious and don’t call me Shirley.

A hospital? What is it? It's a big building with patients, but that's not important right now.

I can make a hat, a brouche, a pterodactyl...

Stewardess, I speak jive
and…well, some are only funny in context and it shows what a tightrope the Zuckers and Abrams walked because when one of the jokes fell flat…it fell very flat. Just watch the second Airplane movie (without the Zucker and Abrams) to see how much less funny that one is. 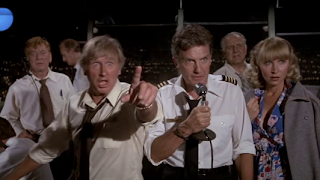 * This just in...The 2013 revised 5th edition copy of 1001 Movies You Must See Before You Die has included The Towering Inferno! Woo hoo!﻿