I cut out and pasted movie advertisements in a spiral notebook during that transitional movie year all those many, many movie years ago. Looking at it now, much of the print from the faded pages has yellowed, but yes, I still have it! So I’ve decided this month to stroll down memory lane and comment on some of the film ads from my movie scrapbook.  I’ll also try to fit in a suitable 1001 movie entry at the end of each post since that is still the point of this blog. 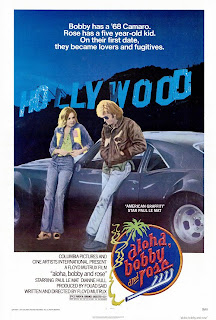 Bobby has a ’68 Camaro. Rose has a five year-old kid. On their first date they become lovers and fugitives.

So it’s Bonnie and Clyde meets Two-Lane Blacktop maybe? The Camaro (which I’m guessing is the real star of the film) is featured in the ad in front of the Hollywood sign where Bobby and Rose are leaning against the car talking about, you know, life and stuff. 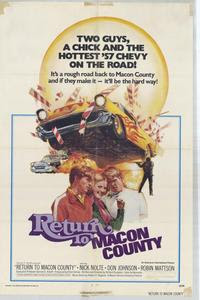 The main thing I remember about this sequel to the Max Baer hit Macon County Line is that I got in the theater to see it on a free pass when my brother reviewed movies for the Valley Times News in Lannett, Alabama. The ad features a young Nick Nolte and Don Johnson and reads, “Macon County-Six Years Later: Nothings Changed But the Faces. Strange things still happen to strangers-especially kids like Bo, Harley and Junell.”

A different ad for this film that I found to the right seems to be trying to promote this as more of a Burt Reynolds good ole boy movie than the somber ad that I have in my scrapbook. Whatever sells I guess. 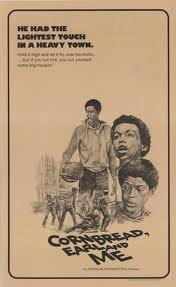 3. Cornbread, Earl and Me

Cornbread, Earl and Me was probably one of the few Hollywood films with a black cast during the early to mid 70's I can remember that wasn't a Dolemite/Superfly Blaxploitation film.

Hold it High and Let it Fly was his motto...but if you cut him, you cut yourself some big trouble!

The movie ad I have promotes basketball star Keith (Jamaal) Wilkes as Cornbread, in his first (and last) starring role.

I kept think Kotter kid Lawrence Hilton-Jacobs was in this one, but soon realized I was thinking about Cooley High instead. Haven't we all gotten Cornbread, Earl and Me and Cooley High mixed up at least once? 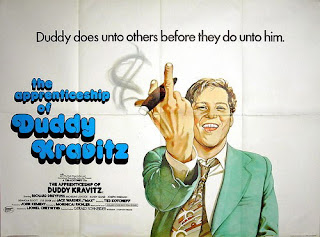 4. The Apprenticeship of Duddy Kravitz-

How not to do a movie ad. The ad starts with the question What make Duddy run? The ad should answer something like: Because the law is on his ass! To prevent his girl from marrying another man! Or Just for the hell of it!” Instead the ad gives us a five paragraph explanation in small type that even now I can’t get to the bottom of. Goodbye, Duddy, I’ll think I’ll go watch something a little less long winded like Vanishing Point instead.

Clearly the ad to the right isn't the one I'm talking about. This one just has Duddy just giving us the finger. Much better than the other one. They should have gone with this one all along. 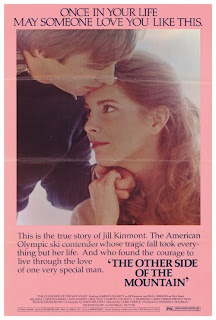 5. The Other Side of the Mountain

Basically a mid-70’s version of something that would have been written by Nicholas Sparks if he had been around then.

The ad claims that

It takes a rare and special movie to each week attract larger audiences than in each preceding week!

The above description really isn’t exciting enough for me. Just say instead that-Mountain gets bigger and bigger and there aint’ no stoppin’ this behemoth! ...or something to that effect. 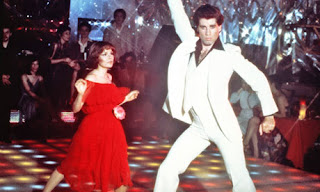 When you discuss Saturday Night Fever, you can talk about how it is a strong urban drama among young friends in the big city, or about John Travolta's breakout role of Tony Manero, the loser by day, who achieves meaning in life only on the dance floor at night, or how director John Badham captures the essence of disco during the late 70's. But if you were in high school during the time this movie was released, the thing you will mostly take away from Saturday Night Fever is the soundtrack. If you listened to top 40 radio you really couldn't get away from it. But for me, the "soundtrack" of Saturday Night Fever extends beyond what was on the actual movie soundtrack to other disco songs of the era that represent the time.

1.Stayin' Alive by The Bee Gees (Song I heard a million times, but never quite got the lyrics down until remade by the geriatric singers from the documentary Young @ Heart about thirty years later.)

3.How Deep is Your Love by The Bee Gees (They had to have something to play during Saturday Night Fever's sentimental scenes)

4.You Should Be Dancing by The Bee Gees (Probably the best of the Bee Gees contributions to the film and also provides the background to Travolta's best moments on the dance floor.)

5.More Than a Woman by The Bee Gees/Tavares (Heard plenty of both versions of this song back in the time. Tavares makes me think of former Pittsburgh Pirate Frank Tavaras, which I mention for no reason in particular.)

6.Hot Stuff  by Donna Summer (One of the more catchy disco tunes and accentuated by the fact that Donna Summer was pretty hot stuff herself at the time)

7.A Fifth of Beethoven by Walter Murphy (When this came out, I remember critics often using the terms "Beethoven" and "spinning in his grave" together more than once.)

8.If I Can't Have You by Yvonne Elliman (Yvonne's other claim to fame was playing Mary Magdelene in the film version of Jesus Christ, Superstar. And who says Mary Magdelene can't be Hawaiian?)

9. Emotion by Samantha Sang (This top ten hit with the Bee Gees singing backup vocals sure seemed like it was in Saturday Night Fever, but wasn't)

10. Disco Inferno by The Trampps (I always loved the line, "The funk was flaaaminnn' outta control!)

11. Groove Line by Heatwave (Before looking this up, I had thought it had been recorded by Peter Brown. See #29)

13. Shake Your Booty or That's the Way I Like It by K. C. and the Sunshine Band (I know there's a difference between these songs, but I can't think of one without the other.)

14. You Make Me Feel Like Dancing by Leo Sayer (Definitely a signature Disco song, sung by "the guy who often dressed like a clown, sang falsetto looked a little like Richard Simmons")

16. Disco Duck by Rick Dees (I'm all for novelty songs, but I never got or liked Disco Duck. Listening to it now...I neither get or like Disco Duck.)

17. Boogie Wonderland by Earth, Wind and Fire (Just watched the video for this, remember now how damn flashy these guys were! I guess I'm just going to have to live with the reality that I'll never be nearly as funky as Maurice White. Sigh...moving on.)

18. I Will Survive by Gloria Gaynor (Yeah, yeah. I know. Your boyfriend just left you and you played this song a gazillion times until you stopped thinking about him. Whatever helps, Gertrude.)

19. Funky Town by Lipps Inc (Don't think there ever was an album called Lipps Inc's Greatest Hits. Just a hunch.)

22. I Love the Night Life by Alicia Bridges (The only person on this list I met. During the early 90's she worked at a "gay variety store" next to veterinary clinic where I worked. Nice lady.)

23. Car Wash by Rose Royce (Can't remember if the song came before the movie or the other way around. I know I could look it up, but I'd rather it just remain a mystery.)

24. Shake Your Groove Thing by Peaches and Herb (Was never sure what my groove thing was or if I wanted to shake it, but I sure heard this one a lot during the late 70's)

25. Don't Leave Me This Way by Thelma Houston (Can't think of this song without picturing spinning disco balls.)

27. Le Freak by Chic (Seems like when the radio wasn't playing Shake Your Groove Thing, they were playing Le Freak.)

29. Dance With Me by Peter Brown (Peter Brown may not have done Disco Inferno, but he for sure did this one.)

30. Last Dance by Donna Summer (And the last listing has to go to the undisptued queen of disco.)


I never thought I'd ever have a desire to compile a list of disco songs, so never say never. 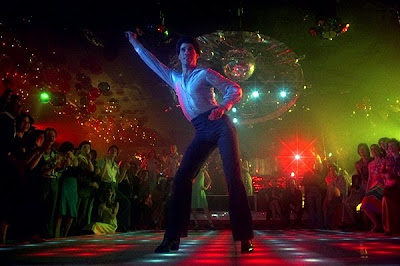