I cut out and pasted movie advertisements in a spiral notebook during that transitional movie year all those many, many movie years ago. Looking at it now, much of the print from the faded pages has yellowed, but yes, I still have it! So I’ve decided this month to stroll down memory lane and comment on some of the film ads from my movie scrapbook.  I’ll also try to fit in a suitable 1001 movie entry at the end of each post since that is still the point of this blog.
(1975 Movie Scrapbook Post 10: Action Heroes) 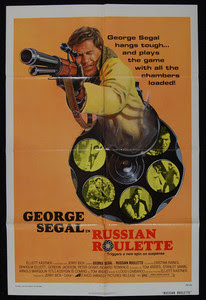 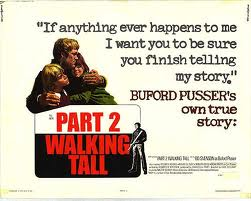 2. Part 2 Walking Tall-You can’t get more 70’s kick ass action than Joe Don Baker in Part 2 Walking Tall. Wait, I forgot. They got Bo Svenson to play the lead for part 2. I guess Joe Don was too busy making Framed and Mitchell  to appear in the movie that made him semi-famous. The ad cries out, “If anything ever happens to me I want you to be sure you finish telling my story.” Apparently they didn't finish telling the story as there was later a Walking Tall: The Final Chapter. 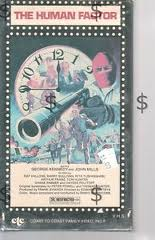 3. The Human Factor- Clearly when movies from the mid 70’s thought of terrorists, they were thinking of mostly white guys in ski masks. The ad for this one states, Every 24 hours an American Family will be killed by radical assassins…If the CIA, FBI, and Police Can’t Stop It…The Human Factor will!

The cool little ad features a guy in a ski mask with a gun about half the size of the entire ad. Various pictures of people in chains, tied up and explosions set around a rare starring role for disaster movie specialist George Kennedy who this time is apparently not going to take any crap from anybody! 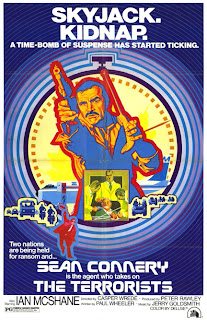 4. The Terrorists- Skyjack! Kidnap! A Time-Bomb of Suspense Has Started Ticking. Two nations are being held for ransom and Sean Connery is the agent who takes on the terrorists! I do not remember this movie at all because I am sure I would remember any 70’s movie with Sean having a both a full head of hair. 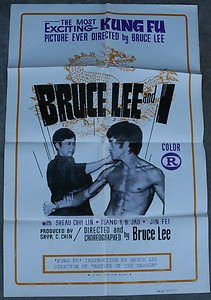 5. Bruce Lee and I-I remember after Bruce Lee’s death there were many Kung Fu films featuring a lot of sound alike actors (like Bruce Li). Though this one is listed as being directed by Bruce Lee himself, but I’m skeptical of that claim!

The one movie that The 1001 book does list with Bruce Lee is Enter the Dragon. I had a little deja vu with this one. I thought that maybe I had seen it before, but soon realized that I only had only watched the parody version from a segment of Kentucky Fried Movie.*

The main reason to watch Enter the Dragon is Bruce Lee and the fight scenes (including some unexpected martial-arts moves from the the ubiquitous John Saxon). The plot does remind me a bit of one of those mid-70's Roger Moore-James Bond movies- (The Man With the Golden Gun in particular, though Enter the Dragon was made first) including the island supervillain Han, a few lovely ladies and the Afro donning Jim Kelly whose main line is “Bullshit Mr. Han-Man! Man, you come right out of a comic book!”
The DVD I watched included the extra documentary Bruce Lee: A Warrior’s Journey, which I actually liked better than Enter the Dragon. It really made me appreciate Lee that much more and included the footage of Lee’s unfinished movie, The Game of Death. 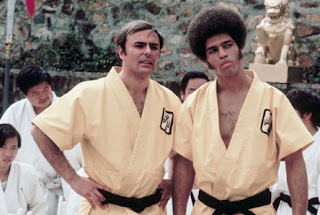 *This makes three straight blogs that I've made a reference to Kentucky Fried Movie. I bring this up for no reason in particular.
Posted by 1001: A Film Odyssey is produced, directed and written by Chris, a librarian. at 8:43 AM