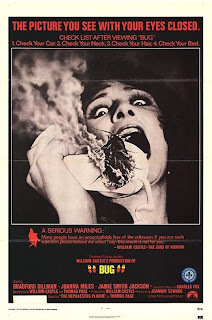 Bug is a film by the self proclaimed master of horror William Castle. I admit that I went to see this movie when it came out. From what I remember, Bradford Dillman was a science teacher who unearthed some deadly firebugs who cause havoc and eventually achieve the ability to spell. Which if I remember correctly was  a much scarier scene than I just described. The ad has a screaming woman holding a telephone that a bug has just ignited with the tagline, “The Picture to See With Your Eyes Closed!”


The clever ad also advices you to check your car, neck, hair and bed after leaving the theater. (I can't remember if I did all that after I saw it.) 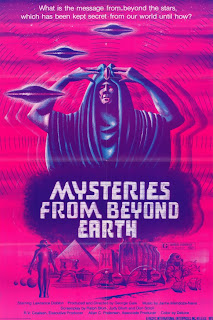 2. Mysteries From Beyond Earth

Thanks to Erik Von Daniken (or no thanks to) and his book Chariots of the Gods? There were an awful lot of psuedo-documentaries during the mid-70’s about UFO’s, the Lock Ness Monster and Big Foot, Noah’s Ark or The Seach for the Historic Jesus. And yes, we the mid-70’s viewing public paid to see these movies! I admit I kind of liked them at the time, though today they would just stick something on these topics at 2 a.m. on The History Channel.

The ad for Mysteries From Beyond Earth asks, “What is the message from beyond the stars which has been kept secret from our world until now?” The picture on the ad features a meditating guru, drawings of Ed Wood imagined spaceships and something in little glass cases which look like the robot maid from The Jetsons, though I’m pretty sure that isn’t what it’s supposed to be. 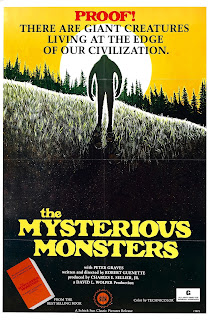 Yet another of those docu-dramas (and yes, I did go to see it at the theater!) that features the search for Bigfoot and proclaims "PROOF! There are giant creatures living at the edge of our civilization!" Narrated by Peter Graves (Ever seen bigfoot naked?) 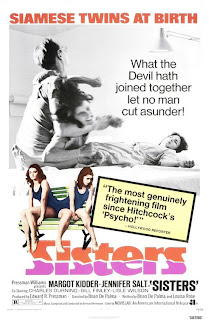 The most highly acclaimed THRILLER of the decade! the ad booms for this interesting early Brian DePalma effort which features Siamese twins and 70's party girls Margot Kidder and Jennifer Salt next to a knife that is about six feet long! Or maybe that’s just the perspective. Anyway, I see the knife as six feet long!

The ad to the right doesn't include the knife, but sometimes you just can't find a copy of an ad on the Internet that looks like the one you had pasted into your scrapbook 38 years ago! 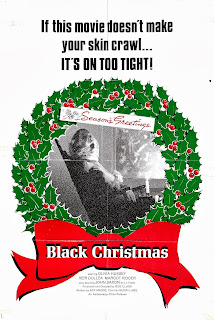 I give the advertisement for this film credit. If this movie doesn’t make your skin crawl…It’s On TOO TIGHT! is a pretty good tagline. And the picture of Santa, who actually looks like a cross between, St. Nick, the demon from The Exorcist and a Lhasa Apso is pretty scary. The cast is interesting: Olivia Hussey (Romeo and Juliet), Margot Kidder (Superman), Keri Dullea (2001: A Space Odyssey) and John Saxon (seemingly every other B horror movie ever made). The movie is also directed by Bob Clark, who later made a less scary movie for the season called A Christmas Story. 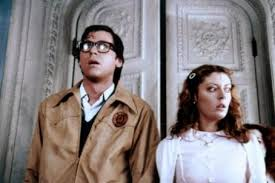 The first time I saw The Rocky Horror Picture Show was actually at a rare afternoon showing in Atlanta. Some of the regular Rocky crew began reapeating lines back to the screen like they are supposed to do, but some in the audience took exception and started yelling for them to shutup. The dispute ended when a neutral party said, "Let them speak. It's part of the show!" The audience applauded and the naysayers were cast aside. I've seen it a few times since, though I've never put on high heels and experienced the Rocky Horror experience fully. So It goes.

It's a pretty silly movie, but like many cult movies, it grows on you after awhile. The music is catchy and I love the song "Science Fiction Double Feature." 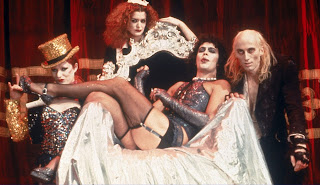