1975 Movie Scrapbook (Post 2: The cast pictures at the bottom of the ad)

One of the cheesier parts of ads from some movies of this era were the pictures of the cast lined on the bottom or the side of the ad. Sometimes the pictures had no name, sometimes they contained a name and sometimes mentioned something about the character-those were usually the funner ones. This was popular, though not limited to, disaster films. I believe it was Roger Ebert that said whenever you see the pictures at the bottom of the ad on film poster, you know it’s probably a pretty bad film. 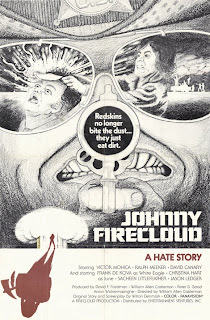 
I still remember the commercial for this film. “Johnnnny Firecloud!” the announcer said with I believe an echo. In the print ad, (not the ad I have pictured, though I like this one too) this Native American action adventure features what looks like a silhouetted lynching by what appears to be redneck lawmen and a raging shirtless Johnny Firecloud about to punch someone which emerges into a giant firecloud! The ad rages, They pushed and shoved and leaned …and leaned harder until they bought themselves an All-American one man massacre! The pictures at the bottom of the ad of the cast for Johnny Firecloud don’t seem to include the most interesting supporting player I saw in the cast credits. That would be Marlon Brando’s controversial Oscar stand-in acceptor Sacheen Littlefeather! Wouldn’t it have been great to have heard the speech at Oscar time if we had heard…the winner for Best Supporting Actress is…Sacheen Littlefeather for Johnny Firecloud! Unfortunately, this film was never really on the Oscar radar…or any other radar that I can remember. 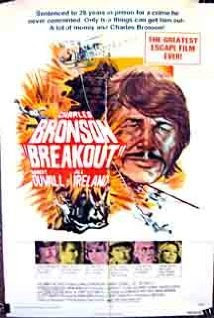 Tough, serious and mean looking Charles Bronson seemed born to be an action star. He did some memorable supporting work during the 60’s in The Dirty Dozen, The Great Escape and had a great staring role in Once Upon a Time in the West. The only problem with his starring roles from the 70’s is that most of them weren’t very good. But you can’t fault him for lack of volume. He seemed to crank out an action movie every other week during the mid-seventies. For Breakout, I still remember the TV ad for this proclaiming, BRONSON! BREAKOUT! BEAUTIFUL! The print ad before me has a large red nosed Bronson surrounded by drawings of explosions, helicopters, airplanes and people climbing ropes. The pictures of the cast at the bottom of the ad include little blurbs.

CHARLES BRONSON: The hit man of “Death Wish”
ROBERT DUVALL: the brains behind “The Godfather”
JILL IRELAND: Has a proposition for escape
RANDY QUAID: the law breaking sailor from “The Last Detail”
JOHN HUSTON: the big boss of “Chinatown”
SHERREE NORTH: has a sure way to distract prison guards!

My favorite of these blurbs is obviously Ms. North and her ability to distract the prison guards. I guess she lures them away with her homemade chocolate brownie recipe! 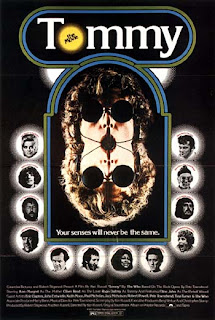 The Ken Russell film based on The Who’s rock opera would definitely be on my 1001 list, though it isn’t on any of the 1001 actual lists. The cast pictures at the bottom (technically the sides as well as the bottom) of this ad features Ann-Margaret as the Mother, Roger Daltrey as Tommy, Eric Clapton as the Preacher, Keith Moon as Uncle Ernie, Oliver Reed as The Lover, Elton John as the Pinball Wizard, John Entwistle as Himself and Tina Turner as the Acid Queen. Interestingly, there is no side picture of Pete Townsend. Go figure. 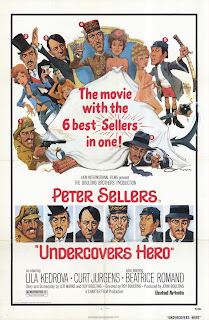 A Peter Sellers movie that is described in the ad as Six Sellers in One! Peter Sellers was a major comedic talent and played multiple roles in several films (Dr. Strangelove, The Mouse That Roared etc.). But this ad for Undercovers Hero is the only time I have ever heard of this movie! The pictures of the cast at the bottom is interesting in that they are all pictures of Sellers in different gettup.

Apparently an alternate name for this movie was Soft Beds, Hard Battles, but I never saw it under that title either. 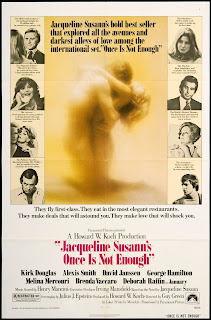 5. Once is Not Enough

This theatrical soap opera based on the Jacqueline Susann novel spawned perhaps the silliest of all the movie ads that feature the pictures of the cast/characters at the bottom of the ad with a little blurb at the bottom. They are worth repeating in full.

Kirk Douglas as “The husband for sale-bought for $3 million!”

Brenda Vaccaro as “The high-fashion editor with low desires!”

Gary Conway as “The Astronaut, but we know by the description that he is “a hero-but to his wife-something else.”

The ad’s tagline in bold print reads, JACQUELINE SUSANN’S BOLD BEST SELLER THAT EXPLORED ALL THE AVENUES AND DARKEST ALLEYS OF LOVE AMONG THE INTERNATIONAL SET!

I can’t say I miss this type of theatrical soap opera on the big screen, but I do miss the ads for them.

Today’s 70’s Movie with the cast pictures at the bottom of the ad experience is... 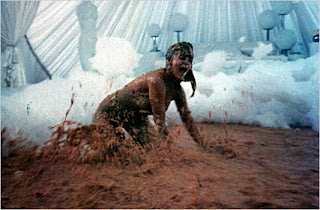 Since none of  the movies with “the cast at the bottom of the movie ad” made the cut for the 1001 list, I just decided to watch Tommy again.

The film version of Tommy may seem a little clunky in spots, and the song stylings of Jack Nicholson and Oliver Reed are less than inspired, but Ken Russell's film is still an original and creative interpretation of The Who's Rock Opera.

1. Tommy's plight begins with the songs "Amazing Journey" and  "1951" and put in the context of a World War II setting. A dramatically effective as way to start to the film.

2. "Eyesight to the Blind" envisoned as a temple to worship Marilyn Monroe.

3. "Acid Queen" Once you see Tina Turner as the Acid Queen, it's hard to imagine anyone
else doing it.

4. "Cousin Kevin" I may have to revise this one on the list. The scene featuring Kevin Nicholas's demented sociopath  Kevin torturing the deaf/mute Tommy quickly made me start to feel uncomfortable and wish it would end quickly.

5. "Fiddle About" Keith Moon was no singer, but he has an absolute field day as Tommy's perverted Uncle Ernie.

6. "Champagne" Bizarre fantasy not in the original Who album involving broken TV's, a river of baked beans, suds and a writhing Ann-Margaret (pictured above). What more could you ask for?

7. "I'm Free" Daltrey finally gets the opportunity to sing halfway thought the movie. Really like his adulation during this song.

8. "Sally Simpson" The song about Tommy's most adoring fan and maybe my favorite song from the movie.

9. "See Me, Feel Me/Listening To You" is a rousing way to end the film.

10. and of course, Elton John as The Pinball Wizard. (pictured below) 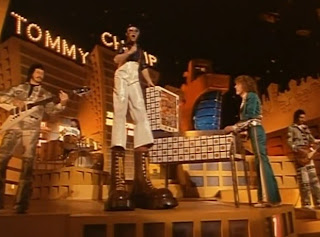 Posted by 1001: A Film Odyssey is produced, directed and written by Chris, a librarian. at 8:29 AM