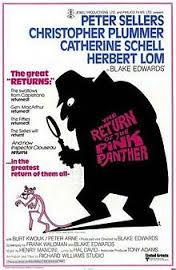 1. Return of the Pink Panther

Nice ad featuring a giant shadowed Inspector Clouseau looking through a magnifying glass at the actual cartoon Pink Panther. I remember being excited when this movie came out and still think it’s the best of the Peter Sellers/Blake Edwards Panther films. 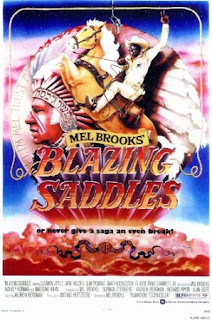 from the people that brought you The Jazz Singer! It took me awhile to realize what they meant by this was that Warner Brothers put out both The Jazz Singer and Blazing Saddles, though it is rarely seen a double feature to my knowledge. The colorful ad featuring Mel Brooks in full Indian headdress wasn't necessary to lead me to want to see this movie when it came out. I bugged my dad until he took me to see it. He also took me to see Young Frankenstein that year. Thanks, dad. 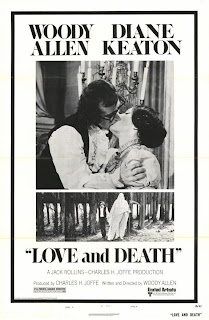 First Woody Allen movie I ever saw at the theater (Emory Cinema, a movie house that tragically died in a fire in 1978) and still one of my favorites of Allen’s. This nice big ad includes the memorable picture of Woody in the countryside with Death. 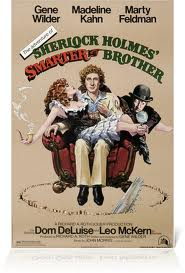 Funny thing about this movie. It featured three members of the cast of Young Frankenstein (Gene Wilder, Marty Feldman, Madeline Kahn) which was a definite favorite of mine from a year before. I also bought the book (actually a novelization) for Smarter Brother. The only problem is that I never got around to seeing the movie! Still haven’t seen it. 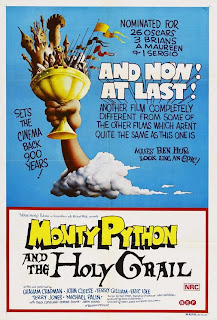 5. Monty Python and the Holy Grail

Of course Holy Grail, may indeed be the Holy Grail of 70’s quotable movies. (It’s just a flesh wound. She turned me into a Newt! We are the Knights who say… NI.) The ad is pretty good too-Makes Ben Hur look like an Epic! SEE-*The Trojan Rabbit*The Holy Hand Grenade of Antioch *Sets the Cinema Back 500 YearsKnight of Niek! *And Much, Much More! 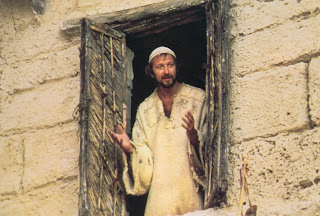 Monty Python seemed to come out of nowehere with this strange British sketch comedy television show that came on PBS during the mid 70's. A few lumberjack, dead parrot, and office of silly walks skits later, they came out with one of the ulimate cult movies of all-time, Monty Python and the Holy Grail.

But let us not forget the movie Monty Python ended the 70's with, The Life of Brian, a comedy of a man whose life parallels the life of Jesus. It received a lot of flack from religious groups despite the claims that this was not supposed to be the story of Jesus.

Oh well, my advice to those who might take offense is,
If life seems jolly rotten there's something you've forgotten
And that's to laugh and smile and dance and sing
When you're feeling in the dumps don't be silly chumps
Just purse your lips and whistle, that's the thing
And always look on the bright side of life

Plus it's just as funny as Holy Grail!

Posted by 1001: A Film Odyssey is produced, directed and written by Chris, a librarian. at 8:42 AM