AN AMERICAN WEREWOLF IN LONDON (1981) 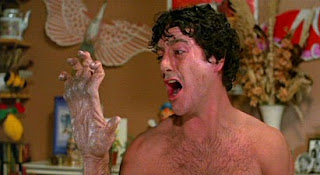 Well, I saw a werewolf with a Chinese menu in his hand
Walking through the streets of Soho in the rain.
He was lookin’ for the place called Lee Ho Fooks,
Gonna get a big dish of beef chow mein.
Aaahoo, werewolves of London
-Warren Zevon.

I recently used my Apple iwayback machine to go back in time to watch Star Wars from a more objective angle. With An American Werewolf in London, I used no such technogadgetry, because it naturally feels like I went forward in time. Has it really been 28 years since this movie was released?? I’ll check the calendar again. Yep, 28 years.
Mr. Peabody! You’ve definitely been screwing with the iwayback machine.

When I think of this film, the one name that comes to mind is makeup guru Rick Baker, who won his first of six Oscars for this film. David Kessler’s transformation into the werewolf is the defining moment in the film and it’s still jarring. (Who needs fancy computer graphics anyway?) Though the makeup for the ever-deteriorating corpse of David’s friend Jack is pretty good too.

The post-Animal House and pre-Thriller video John Landis is the writer-director here and his film still seems fresh (A strange choice of word I admit for a moviefeaturing a wandering corpse). I do think at 98 minutes, the film could actually have been longer. The story behind the werewolf at The Slaughtered Lamb pub could have fleshed out (another unfortunate word choice) a little more, as well as the story behind the cover-up to David and Jack’s attacker. But if the worst criticism you have of a movie is that you wanted more of it; it’s a good sign.

David Naughton (will always be the peppy singing guy in the Dr. Pepper commercials) is OK in the lead role, though I’m not too surprised he didn’t become a bigger movie star. Griffin Dunne (of the under appreciated After Hours) as his unfortunate friend plays a mighty good corpse and maybe should have been a bigger star. The lovely Jenny Agutter (of Logan’s Run and a rather low-rent version of Othello I saw) is also good.

And we don’t get scenes in films today like David trying to call his family from London to tell them he loves them as he begins to realize his time is running out. Why don’t we get scenes like this anymore? Because the easy access to people through cell phone technology has ruined many such dramatic moments! Not that I’m volunteering to give up my cell phone, I’m just saying.
Posted by 1001: A Film Odyssey is produced, directed and written by Chris, a librarian. at 8:18 PM