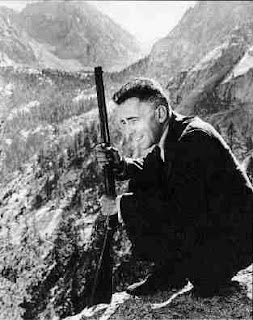 “But the fix blew up and a screw put the blast on me.” If you hear a line like this, you know you’re probably watching a Warner Brothers gangster movie from the 30's or 40’s. Ah, when police were coppers, women were dames, men wore snap-brim hats and your only goal in life was to crash out, whether in actuality or just metaphorically.

I watched many of these gangster movies growing up, mostly thanks to Ted Turner’s superstation. I’ve also seen a lot of Humphrey Bogart movies. Yet somehow I missed one of the most famous, High Sierra.

The first thing I noticed about High Sierra is the amount of talent involved. The screenwriters were W. R. Burnett (of the book Little Caesar, which I have actually read) and John Huston (who later became, of course, John Huston.). The director was Raoul Walsh, whose most memorable film might be White Heat (“A copper! I treated you like a brother and you’re nothing but a stinking copper!" or something like that). The cast was headed by Ida Lupino (Whose name I like to use creatively in sentences as in “Don’t go all Ida Lupino on me”). Also of note in the cast is Henry Travers, though it’s very hard to think of him as anything but Clarence Oddbody, angel second class. Willie Best’s performance here would probably make Spike Lee shudder, but Sidney Poitier roles were a generation away and even then were mostly reserved for Sidney Poitier. I’ve also got to mention Pard the dog, played by Zero according to the credits. Sure he brought bad luck, but oh, so cute!

But what this movie is most remembered for is Humphrey Bogart. Relegated to supporting roles as heavies in the 30’s, this film is acknowledged as his breakout role, which led to the more heroic Bogart from The Maltese Falcon and Casablanca.

What’s interesting in High Sierra is that “Mad Dog” Earle represents a kind hybrid between phases of Bogart’s career. Earle is still a criminal, but he still exhibits a soft spot for cripples (his word), yappy dogs and wanting to do his heist by the book even after the man who hires him dies.

I wasn’t sure how to end this blog, so I’ll just type my opening again. “But the fix blew up and a screw put the blast on me.” I’m going to try to bring this line up in conversation whenever the opportunity arises.
Posted by 1001: A Film Odyssey is produced, directed and written by Chris, a librarian. at 8:16 PM