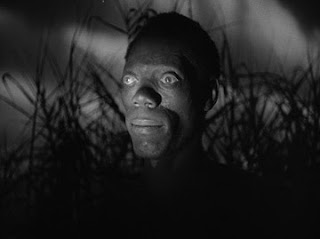 I just finished watching I Walked with a Zombie at the library and I really don’t know what to say about it. I’m going to rest awhile and think about it tomorrow. I feel so comfortable right now…as I can barely stay…awake…

Nurse Betsy took me by the hand and led me out the front door of the plantation house. The West Indies wind was swirling, but I willingly went with her, as I had grown tired of the sibling rivalry that dominated the house that had now culminated in an argument over the relative merits of the Declaration of Independence versus the Magna Carta.

As we walked past the statute of St. Sebastian, Nurse Betsy rationalized to me that though the statue was once the figurehead of a slaveship, that ship did at least take them to a beautiful place. I found myself unable to concentrate on her strange logic, as the only thing I could think of was the 1976 film ‘Sebastiane’ that basically turned out to be just one long homoerotic fantasy! I didn’t know that’s what it was going to be when I saw it at the theater! Oh, Nurse Betsy! Won’t you believe me?

Despite the coolness of the evening, the Nurse’s hand felt warm to the touch and actually made me shudder with pleasure as she directed me to the dark wood that stretched before us. At that point, I would have followed her over a cliff if that were where she wanted to take me.

Before we could enter the wood, a bright light appeared before us. A man appeared. Was it a ghost? A Zombie?

No, It was a calypso singer.

I grabbed the strings of his guitar before he could continue and informed him that he was very rude to be singing about me while I was standing right in front of him. He apologized, bowed and walked away.

Nurse Betsy tilted her head for me to continue on and I dutifully followed her past swaying stalks of sugar cane. A gentle mist came down as we continued. I felt at ease on my journey until we ran into a large black man with bulging eyes, who despite his striking appearance nodded to Nurse Betsy for us to pass. A hooting owl seemed to mock us as we covered our noses to block the odor that came from several animal carcasses that hung from the trees along our path. In my haste to escape the stench, I tripped over the remains of a human skull. Nurse Betsy helped me back up, but by this point even the charms of my companion weren’t enough to make me want to continue. She directed me to a clearing where we heard the rhythmic beating of several drums that I felt unusually drawn to. It was there that I saw a gyrating witchdoctor pulling a doll by a string. The little figure at the end of the string resembled a man. The witchdoctor continued to pull the doll toward him. It was then I noticed the doll was carrying a book. Why the doll was…was…a librarian.

I grabbed onto Nurse Betsy and pleaded with her not to make me walk with a zombie anymore, but as I felt a force engulf me as the man picked up the doll, it finally dawned on me that the zombie…was me.

When I awoke, I realized the movie had more effect on me than I first thought.
Posted by 1001: A Film Odyssey is produced, directed and written by Chris, a librarian. at 2:52 AM