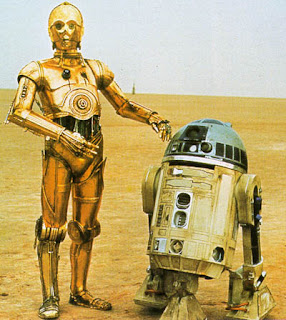 The first time you see a movie as famous as Casablanca, Citizen Kane, or Gone With the Wind, it comes with the additional baggage of being called “the greatest movie of all time” or at least one of them. There is so much pressure on the viewer to see what others see in it, the viewing experience is often not what it should be. The viewer may lean toward nodding their head in agreement not to appear obtuse or take an opposite tack and say, “What’s so great about that?”

Star Wars (subtitled A New Hope IV) has similar problems. So iconic in stature, so many sequels, so many have seen it and so many toys have been sold, I’m sure a bias will kick in as I watch and will be tempted to say, “What’s so great about that?”

What’s the solution to achieving objectivity? Well, the only solution has to be a mind meld to make me forget (intentional Star Trek reference) and my use of the newly released Apple iwayback machine that can take me back to 1977…1977…1977…

I feel a bit woozy and disoriented but I’m still excited about seeing this new film called Star Wars from the director of one of my favorite films, American Graffiti. Wow, the screen seems so big! But aren’t all movie screens this size? Huh. Wait, it’s about to start:

The theme song during the opening credits. Lush, orchestral makes me think of dramatic events. A good start. IV A New Hope? Did I somehow miss the first three in this series? Or is it like I. V. as in needing a transfusion? Roman numerals can be confusing. These rolling credits are fun. Reminds me of those old Flash Gordon serials they show on late night TV. It seems Mr. Lucas is a filmmaker that respects the past.

The plot: There seems to be trouble within the galactic empire and the rebel force. I think the empire are the ones in white body armor, but it’s a little hard to tell who is who. There is a princess. I remember reading about her. She’s played by Debbie Reynolds’s daughter. Great, now I just had a flashback to Singin’ in the Rain. I don’t know why my concentration is so off.

Wow, look at this guy. A hard breathing, black cloaked & helmeted authority figure. Wonder if he’s a bad guy? Wink, wink. I thought there was suppose to be more gray area in films today. Not that it might not be Travis Bickle underneath that cloak. The figure has the distinctive voice of James Earl Jones of The Great White Hope. For some reason the phrase “This is CNN” keeps running through my suddenly pounding head. What the heck is a CNN?

There are a couple of androids that are beginning to remind me of the supporting characters in Kurosawa’s Hidden Fortress. In fact the swipes between scene breaks is also reminiscent of Kurosawa and other older films. Like I said, a filmmaker that respects the past. The gay android is CPO3 (reminiscent of the gay robot in Woody Allen’s Sleeper) and the other is D2R2. (I might not have their names right, I was jotting this down quickly). CPO3 reminds me of a metallic Dr. Smith from Lost in Space. D2R2 reminds me of the cute little robots from Silent Running. Like I said, a filmmaker who respects the past, but let’s not go overboard shall we George?

The robots come to a planet, battle some little Sand People (can’t decide if they are supposed to be cute or menacing) and deliver a message that gets to Luke Skywalker, who I presume is the hero of this piece by the softer version of the movie's theme that plays every time he appears on camera. Earlier, we learn that Luke wants to go away from home, but his Uncle wants him to till the crops or something like that until next year. Now what film does this remind me of? I got it! It’s a Wonderful Life! George Bailey has to work at the building and loan as Harry gets to go off and be a football hero at Fill-in-the-blank state. Damn you Harry.

Anyway, when Luke says anything, even something innocent like “I was going to Toole Station to pick up some power converters!” He sounds like a teenage girl complaining about not getting invited to the prom by the right guy.

Luke runs into the android’s old master played by (Hip Hooray a familiar actor!) none other that Sir Alec Guinness. Obi-Wan Kenobi. Got to admit that’s a pretty cool name.

Well, the Empire’s men, called storm troopers (As in Nazi storm troopers?) kill Luke’s remaining family. After Luke’s discovery of his murdered family, I can definitely feel a bildungsroman story coming on!

Oh, sorry. I must be getting a migraine. I kept picturing an obnoxious and strange creature that looked like an anteater named, Jar Jar I think? Where did that come from? Well, it was scary in an annoying way. I’ve taken a couple of aspirin. I must say after my daydream about this Jar Jar creature, CPO3 now seems much more palatable to me. Back to the movie.

Luke and Obi-Wan (still a cool name) try to get a pilot and a ship to take them to the Alderon system to rescue the prince or fight the empire or something. Sorry, I lost some of the plot thanks to this dream about this stupid anteater.

Anyway, they come to a kind of intergalactic biker bar and come across this hotshot pilot named Solo and his furry co-pilot he calls Chewy. They are hired. Solo kills a bounty hunter and tells an alien named Jabba that he’ll get his money. What happens to Jabba? We never see him again!

Throughout, Obi Wan is teaching Luke to use a mind/religion/yoga technique called the force. I almost called it the Schwartz, though I’m not sure why. Solo thinks the force is a waste of time. Luke is a willing disciple of the force. Is this a metaphor for the battle between religion and science? I could be reading too much into it. Of course, Obi-Wan’s (still a cool name) mind probes remind me of Mr. Spock’s in Star Trek. I’m growing a bit weary of Mr. Lucas’s “tributes.” to other sources.

Alderon is destroyed by the empire and Governor Tarkin (played by horror star Peter Cushing). Too bad we don’t get to see a one on one confrontation between Cushing and Guinness, though we do get to see a battle with fancy laser swords between Obi-Wan and Tarkin’s subordinate black cloaked figure. And what happens to Obi-Wan? He just kind of disappears in the middle of battle.

I’m feeling kind of faint now. I’ve got to keep moving through this. Alderon’s destruction reminds me of Star Trek when a Vulcan ship is destroyed and Spock feels it on the Enterprise (Obi-Wan feels a disruption in the force), the tractor beam reminds me of Lost in Space. The weapons called blasters remind me of Forbidden Planet. OK! George likes to copy other films and TV shows. Looks like it’s something I’ve got to accept.

Moving on. Solo and Luke try to rescue Debbie Reynolds’s daughter from the giant Star of Death. Debbie Reynolds’s daughter is a lot less whiny that Luke, in fact her voice is quite manly. They battle the storm troopers, fall into a garbage chute (a good scene, but the troopers aren’t very observant to not find them in there sooner)and escape the star of death. They regroup and Luke joins the rebels to attack the star of death. Most of the rebels are killed. Luke uses his mind trick to get to the Star of Death, aided at the last second by Solo.

Sure, Mark Hamill as Luke is whiny. But I think that’s the point. I think he’ll go on to do bigger and better things. I just read he’s doing a movie for next year called Corvette Summer. Now, that sounds like a hit. I’m not sure about his co-star Harrison Ford. His cynical character Solo is a good contrast to Luke’s exuberance, but can this actor play anything else? I noticed Ford’s not going to be in Corvette Summer. (Prediction: Corvette Summer will make three times as much money as Star Wars. I didn’t say life was fair!)

This film was quite a departure for George Lucas after the more personal American Graffiti. I don’t see Star Wars as being a big hit, but it has the opportunity to gain cult status as the years go by. I predict this movie was just a diversion for Lucas. I think he’ll go back to directing smaller, more personal films after this.

I’m also not sure about calling this episode IV. I really don’t see any room for future films here. Good already conquered evil and owww…Damn, why can I not get this picture of the Muppets out of my head now?

You know, I did enjoy this movie, but I would have liked it more without these damn headaches! That’s all for now, I’ve got to rest, only a couple months to go before the premiere of Close Encounters of the Third Kind!
Posted by 1001: A Film Odyssey is produced, directed and written by Chris, a librarian. at 10:09 AM