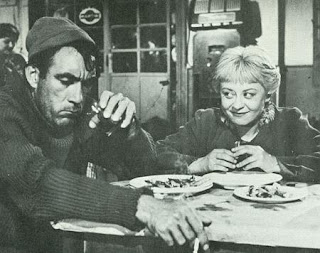 La Strada. The English translation is “The Road,” but somehow that doesn’t have the right ring for this film.

Fellini’s La Strada has some of the techniques of the neo-realistic film, but is more polished, has more surrealistic elements and employs mostly professional actors.

After seeing this for the first time just a few hours ago, I'm sure the images of this film will remain vivid to me for sometime. Zampano’s motorcyle van, the shots of the Italian countryside, the traveling circuses, the sick boy that Gelsomina briefly performs for, the fool’s high wire act and many other scenes are memorable. There doesn’t seem to be any wasted moments, movements or shots in this film.

Giulietta Masina’s innocent and not quite mentally all there Gelsomina is mesmerizing. Her character has been compared to Chaplin’s little tramp, but reminded me a bit of Harpo Marx as well. Her repeated line, “The fool is hurt” is certainly reminiscent of King Lear’s “My poor fool is dead,” and is equally tragic.

Gelsomina is a complete contrast to Anthony Quinn’s Zampano, who as the traveling strongman is all brute force with little humanity to go with it. When he finally does show some compassion in the film’s final shot, it is sadly too late.

The fool, played by Richard Basehart, rounds out the film’s main trio.

The language of the two male stars was presumably English and the rest of the cast was Italian and I’m not sure how all the dubbing was worked, but it does work, though I only viewed the Italian language version. I watched one scene of the English dub and my old bias (no dubbed film unless Godzilla is somehow involved) kicked in.

8 ½ and Amacord were two previous Fellini films I saw and truly liked (granted, it’s been a few years), but I may have a new favorite here.
Posted by 1001: A Film Odyssey is produced, directed and written by Chris, a librarian. at 8:49 PM