THE COLOR OF POMEGRANATES (1969, ARMENIA) 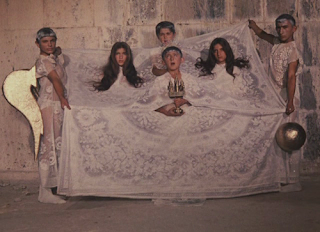 Wife: Hey, honey! Do you feel like going to see a movie?

Husband: Absolutely! I think we should see The Color of Pomegranates.

Wife: That new comedy with Sandra Bullock is opening. That looks pretty funny.

Husband: Well, the film I want to see is from 1969 and about the famous 19th century Armenian poet Sayat Nova! I hear he’s famous anyway. And it’s in Armenian!

Wife: Maybe an adventure film. There’s that new one opening. You know looks a little like Indiana Jones.

Wife: Or a sci-fi. That might be good. Or something supernatural.

Husband: Did I mention it's Armenian!

Wife: You know on second thought, I don’t really think I feel like a movie after all. Why don’t we order some Chinese food?

Wife: I just have one question

Wife: WHAT THE HELL WAS THAT ABOUT?

Wife: Which would be fine if it were a Talking Heads music video from 1983, but I expect a little more from a hour and a half movie!

Husband: Parajanov has been called a God of the aesthetic and a master of style of the pathos of epoch.

Wife: Do you even know what that means or are you just being a pretentious bore again?

Wife: Well, you’re just going to have to forgive me. Armenian lute music is still ringing in my ears!

Husband: The symbolism was vivid, didn’t you…

Wife: Oh, you didn’t get it any more than I did. You just don’t want to admit it so you can pretend to be artsy-fartsy.

Husband: I resent that! I liked the part with the sheep in the monastery and the squishing of the grapes and you know all that, you know Catholic symbolism...stuff.

Husband: Okay! Okay! I didn’t get it either! You happy now?

Wife: Yes. Besides, I’ve always said that you were the man whose life and soul are torture.

Husband: Hey, I guess you were paying some attention.

(Husband and wife kiss each other on the cheek before putting on their respective black tunics, sever the head of a chicken and ride off into the sunset on a donkey to the rhythmic sound emanating from a floating balalaika.)
Posted by 1001: A Film Odyssey is produced, directed and written by Chris, a librarian. at 11:20 PM