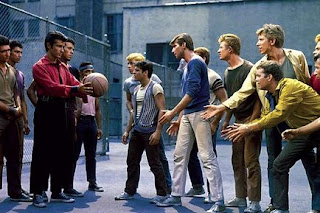 I am currently listening to the Broadway soundtrack of West Side Story which features Carol Lawrence as Maria. Why she’s about as Puerto Rican as…well, Natalie Wood. Of course, she could sing and Natalie Wood had to be dubbed for the film by one of Hollywood’s unsung (pun intentional) heroes, Marni Nixon. The much maligned Ms. Wood and co-star Richard Beymer have often been called the weak link to an otherwise great movie. Well, to tell you the truth, I didn’t think they were too bad. Beymer seemed suitably gaga over Maria and if you hadn’t told me Ms. Wood wasn’t actually singing, I probably wouldn’t have been able to tell.

Well if you accept Beymer and Wood, than the rest should be gravy, right? I would have to say yes. Many of the songs are now standards and all seem perfectly done. “Gee, Officer Krupke” and "America" are personal favorites.

Of course to watch this film, your suspension of disbelief has to include a fight between the rival Jets and Sharks done as finger snappin’ ballet. But if you can’t get there, you probably shouldn’t be watching West Side Story anyway.

Now if you'll excuse me, I'm going to try on a new bonnet and prance around my house while singing "I Feel Pretty." (okay, not really)
Posted by 1001: A Film Odyssey is produced, directed and written by Chris, a librarian. at 3:25 AM